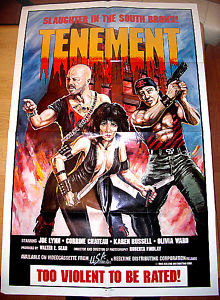 Michael and Roberta Findlay were making some of the trashiest exploitation flicks from the mid. 60's through the late 70's. Their filmography ranged from sexploitation sleaze-fests with titles such as Touch Of Her Flesh and Curse Of Her Flesh to schlock horror such as Shriek Of The Mutilated and the cult classic Snuff. After the tragic death of Michael Findlay in 1977 Roberta continued making movies, leaving us a path of cinematic trash. Tenement being one of her best.

Tenement, also known as Game Of Survival and Slaughter In The South Bronx follows a violent street gang from... Well the Bronx. The gang which consists of some actual South Bronx gangsters and junkies along with actors such as Paul Calderon who would go on to do King Of New York and Dan Snow who most would remember as Cigar Face from The Toxic Avenger... Anyway this leather clad gang of punks declares war on the helpless people who live in a Tenement. The tenants within consist of a blind man, a pregnant woman, senior citizens, a fat drunk, women and children. They don't stand much of a chance against these city street punks who armed with guns, knives, chains and are flying high on p.c.p. but they fight till the end and it makes for one hell of a nasty watch.

One women is gang raped by the gang and is killed with a broomstick to the vagina. Another old women has her throat cut with a straight razor and then is necromanced by a ruthless gang member. We get a pair of scissors through the eyes, a German Shepard is gutted, penis wounds (complete with a baseball bat to the penis and a knife through the penis), gun wounds, some hatchet-fu, death by electrocution, a rat is impaled on a switchblade and then shoved into a mouth, third degree burns from boiling pots of water, a women is crushed by a falling refrigerator, metal rod through the guts, rat poison disguised as heroin overdose (complete with spasm and a bit of blood), gory stabbings, strangulation, death from 5th floor window (complete with achy-breaky skulls to the pavement) and some bare breasts for added entertainment.

The body count is pretty high in this movie and just about everybody dies in original and violent ways. I have heard people compare Tenement to Troma movies and I can see where they are coming from at times but on the other hand Tenements level of violence is much more serious then something like Class Of Nuke Em High or something like that. 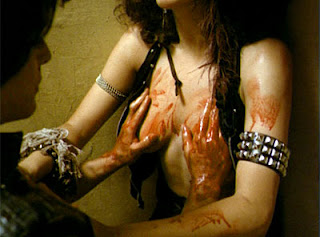