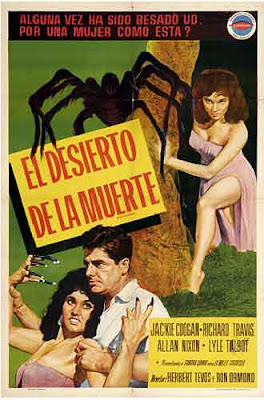 Doctor Aranya which is Spanish for Dr. Spider, is a mad scientist with a mad mole on his face. In fact at times it is almost disturbing to look at. Well anyway Dr. Aranya has a new serum derived from spider venom which allowed him to create a new race of women. Women who will live for hundreds of years and have super-long black nails. These women can rejuvenate limbs just as certain insects do and they are very deadly. Dr. Spider is also creating giant Tarantula's for some reason or other and he also has a army of dwarfs. 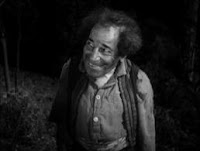 When a group of people on a plane are held hostage by a lunatic with a gun the plane takes a ridiculous crash landing in the desert of Mesa Mexico. The people have to fight for their lives against the mad scientist and his army of giant spiders, super-women and dwarf's.
Mesa Of Lost Women starts of with a bang. We get very strange opening scene with a woman kissing a man to death all while very unique Spanish guitars and pianos clash in the background. Then the 70 minute movie slows down for a long stint with much to much talky chit chat and not enough action. Eventually the movie picks up again in the last 15 min. or so. 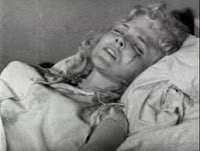 Mesa Of Lost Women offers a strange but very repetitive musical score that at times adds a sense of surreal atmosphere but at others can become pretty annoying. We also get some pretty women and a sort of daring dance number from a sexy spider woman named Tarantella. Tarantella doesn't get naked but does show a lot of leg and even caresses her breasts. We also get giant spiders who leave gaping bite wounds in victims necks. However as I mentioned before, in my opinion the scariest aspect of the film is the giant protruding mole that is growing off of Dr. Spiders face.
Mesa Of Lost Women is in the public domain and the DVD probably only costs about fifty cents. Worth owning for anybody who is into weird Movies From Mars with midgets and monsters. 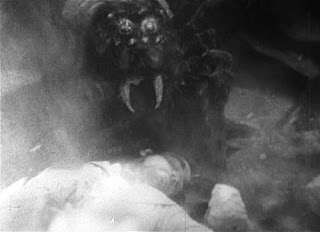