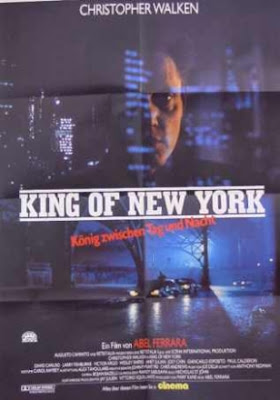 Christopher Walken is Frank White, a drug king pin who is just released from prison. Frank gets back to work immediately killing off other drug lords and trafficking drugs. He plans on using the dirty money to help the poor people of the city, unless the police, enemies or traitors get to him first.
Directed by the great Abel Ferrara (Ms. 45, Driller Killer and the original Bad Lieutenant) with a great cast. Laurence Fishburne, Victor Argo (Taxi Driver, Bad Lieutenant) and of course walken. Together the cast and crew perfectly depict a changing city and the inner struggle of a man deemed a criminal. The thing that makes King Of New York so interesting is the character of Frank White.

Hes a man who on the surface seems to be a pretty bad person capable of doing horrible things. "I have done things that you couldn't stomach to think of" but unlike Travis Bickle as the film goes on we realize that maybe he is a man of moral justice in some weird way. "I never killed anyone who didn't deserve it".


On the other hand its a bad-ass violent, shoot-em-up movie with crazy gun fights and we even get a bit of tit. King Of New York also taught me that Tampons are used for plugging up bullet holes. Then we get the china town mobsters who sit around in small grindhouse theaters watching Nosferatu. "Stick around. I have Frankenstein coming on next". Seems like my kind of people. Another thing that makes this movie amazing is that when its all over, like Bad Lieutenant, it keeps you thinking. I personally feel there are no good guys in this movie. Not Frank White or the police. They all have their own moral standards and believe that they are doing something good but in the end nobody is Innocent. 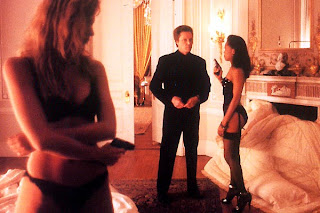