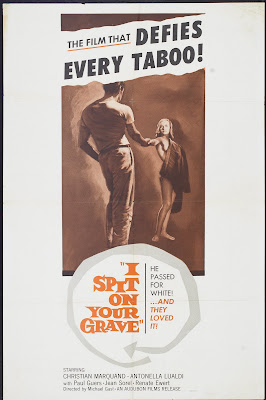 Not to be mistaken for the 1978 rape/revenge movie of the same title but this French exploitation flick is also the tale of revenge. This one has a pretty unique plot. It stars Christian Marquand from And God Created Woman, who plays Joe Grant. Joe is a light skinned black man and his brother is lynched by the racist towns-folk after being accused of raping a white woman, who was his soon to be bride. Joe leaves town and plots out a revenge in the name of his brother but instead finds himself in the same situation.
I Spit On Your Grave (1959) is a hard film to categorize because its almost like a early sexploition film in the fact that it is so sexually charged with lots of pretty women in teasing skimpy clothing. There is also a bit of nudity on display. Its also almost a early blaxploitation film due to the subject matter and racial tension within the film.
One thing that I picked up on was a coincidence with the 1978 film. There is a line in this movie that strikes a big similarity with the tagline for Meir Zarchi's film. "There isn't a jury in America that will convict you". The brilliant exploitation tagline for the 78' film states "There isn't a Jury in America that will convict her for what she's done...". Can't help but wonder if this connection was done purposely.
I Spit On Your Grave (1959) is exploitive and yet has a sense of class to it, with nice cinematography and good acting. The girls are attractive and a bit of violence helps this one moving along. It also has an amazingly realistic scene where a black man is set on fire and the camera doesn't cut away. We see the body burn up, completely smothered in flames.
For some reason this one reminded me or Sam Fuller's Shock Corridor. Check it out for something a little different. 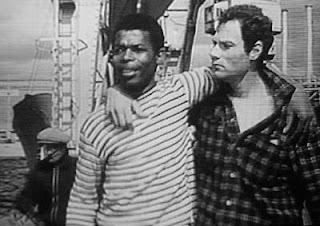 Email ThisBlogThis!Share to TwitterShare to FacebookShare to Pinterest
Labels: Blaxploitation, I Spit On Your Grave (1959)