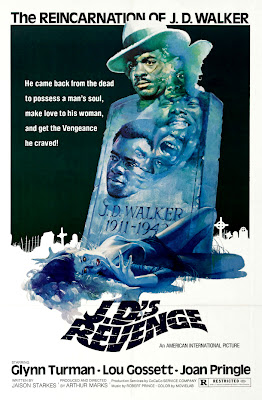 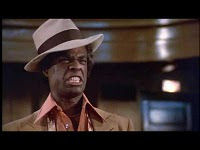 J.D.'s Revenge differs from the average Blaxploitation flick in the sense that it starts off slow and has a bad ending but the rest of the movie is awesome. Usually these low budget black action films start off with a bang and then really slow down until the final.
Glynn Turman plays our possessed antihero and he does a great job with his personality changes between evil J.D. Walker and boring straight laced college kid.  This thing was directed by Artur Marks, The same cat who did Bucktown and Monkey Hu$tle. The nature of this film places J.D.'s Revenge in the slim Horror/Blaxploitation genre along with films like Blacula and of course Abby which is a better known possession (Exorcist ripoff) Blaxploitation flick.

This one also offers up its fair share of nudity with typical strip club scenes and of course some sweet love making scenes. We also get a few rape scenes and the most memorable one shows a woman being tossed around the house and having her clothes ripped off by our scar-faced gangster. She is bruised up pretty good and it makes for a heart pounding scene. The violence seems to escalate as the film goes on. We get slaughter house footage, which seems to have been a fad in the 70's. Some throat slashing, shoot outs, a old lady is banged up in the back of a cab with some demonic taxi driving and we also get some nasty knife fights.
In one of my personal favorite scenes a criminal is comparing a priest to a pimp. The criminal claims that the lord is like a fix that the junkies on the street need and a preacher is nothing but a king-pimp and the whores name is Jesus. Unfortunately in the end the film seems to have some what of a demented religious message to it but all in all J.D.'s Revenge is a super-bad 70's flick with pimp-wear, jive talky-talk and the perfect amount of nudity and violence. Check it out cause "They were right. This nigga's crazy".