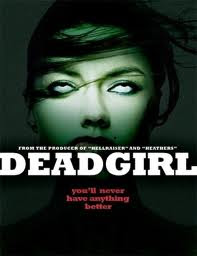 This one hit close to home with the story of two teenage boys who break into a local abandoned mental institution and find a Deadgirl... Or is she? The reason this film appealed to me at first is because when I was a teenager my friends and I would break into our local abandoned psycho ward. We spent lots of time in that place the only difference is we never found a corpse and we most certainly never fucked it.

Deadgirl offers a bit of blood and guts but nothing to overly excessive. We get a exploding diarrhea scene with intestines splashing all over a toilet seat and bathroom stall floor, we get a zombie blowjob complete with castration, a hand is dismembered with a machete, bullet wounds with green gooey puss pouring out, a upper lip is bitten off, faces are beaten bloody and a dog is ripped apart.
Still Deadgirl only comes off disturbing with the corpse fucking scenes and the rest of the movie is unintentionally humorous. Not the worst movie ever made and its worth a watch at least once. There isn't much replay value to this one but most movies made these days aren't worth a watch at all. Its not Nekromantik but its better then any shitty Resident Evil movie.