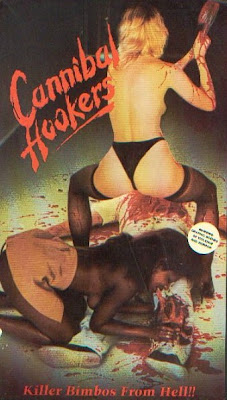 Another piece of crap instalment in the I Will Dance On Your Grave set. This one was directed by Donald Farmer, the same loser who did the equally bad Savage Vengeance.  This one has an amazing punk rock soundtrack but everything else is total garbage. The title is Cannibal Hookers but the girls are more like vampires or something because once someone is bit they join the evil cult of hungry sluts. Plus in the end we see one of these blood thirsty hookers melt into ash.

Well at least the hooker part is accurate and we do get plenty of nudity. The only problem is that these girls are all ugly as sin and I'm not exactly sure what they have all over their faces but their faces all seem oily and shiny. This just makes these ugly bimbos look worse and I know this is the 80's and big hair was the thing but the hair in this one is ridiculous. Axel Rose's hair in the Welcome To The Jungle video had nothing on these shiny-faced Chuds. We also get a leather clad hooker who cant stop staring at the camera. I mean its not like this thing was shot with film. I'm sure the director could have afforded to do more then one take.

Then we got this guy Lobo who is played by a man named Gary J. Levinson. Levinson actually has some good credits (How I don't know) to his name like the far superior Hollywood Chainsaw Hookers, Shock Waves, Surf Nazi's Must Die and Evil Spawn. Well anyway, Lobo is a retarded cannibal who speaks in third person and kind of does all the bitch work for the Cannibal Hookers. The scenes with Lobo are so bad, their good and its pretty much a laugh-riot anytime he is on screen. Some of his great lines are "Be nice to Lobo", "If you don't give Lobo take", and then we have this great scene where he knocks out a cop and says "Lobo did goooooood".
So basically what we have here is a piece of shit shot on video, waste of time, With really bad actors, bad continuity and ugly naked girls running around. The I Will Dance On Your Grave print that I own actually has the nerve to skip back about five minutes and replay a scene as if the distributors couldn't even be bothered watching the dvd to see how the prints were coming out. The tracking starts acting up from the vhs transfer at times and the audio levels are pretty bad as well. Aside from this beautifully packaged turd the film does offer up a bit of gore. We get chopped off fingers, some neck ripping, stab wounds, a bullet to the head, a vampire melt down and a really cool looking movie within the movie. So if a little bit of shitty blood is what you're looking for, I would choose a different movie because gore may go a long way but not anywhere long enough to save this awful mess of a movie. 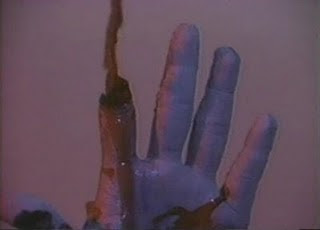