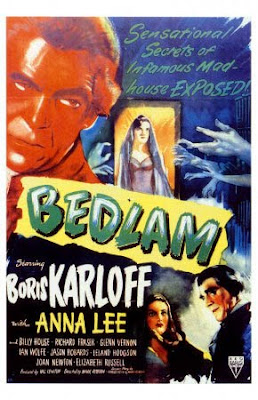 I have a bit of a fetish for any movie that takes place in a mental institution or loony-bin. I love em all from big Hollywood movies like One Flew Over The Cuckoos Nest to low budget cult films like Don't Look In The Basement. All the best ones (of course) are from the 70's but we get some from each era that stand out. Sam Fuller's Shock Corridor (1963) was a good one. I even like the really crazy ones like the ultra-bad Asylum Of Satan.
Bedlam on the other hand is from the 40's and stars Boris Karloff as a manipulative, sadistic ruler of a insane asylum. A woman tries to expose him for the inhumane mater in which he treats his patients and he has her committed as well. Inside the mental institution she will see first hand how cruel Karloff's character really is. Inmates are whipped, tortured, starved and are forced to sleep on straw. They are not given soap and by no means are they treated medically. 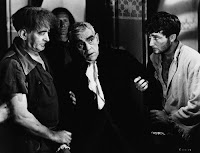 The woman takes it upon herself to reach out to these maniacs and take care of them. This infuriates Karloff and eventually the lunatics band together and get their revenge on Boris (the monster) Karloff. All they needed was some burning torches and a few barking dogs.
Speaking of barking dogs, we get one character who thinks he is a dog. Another thinks he is the worlds greatest judge. Then we have a girl who stands still like a statue throughout the whole film until the end when she goes crazy with a sharp trowel (just like the one used in Night Of The Living Dead). We also get this awesome nut-job who yells out "Split him in two" a lot and a crazy dude shackled up in a cage. This place is nuts. Unfortunately it can't be as cool as the 70's asylum flicks with nudity and foul language. Instead we get great lines like "You call that watery vessel a eye?"! Pretty harsh huh? We also get a Edgar Allan Poe scene where someone is sealed up (alive) behind a brick wall.
Only worth watching for fans of old Karloff flicks and anyone who is really into crazy, nutty, loony, asylum movies. 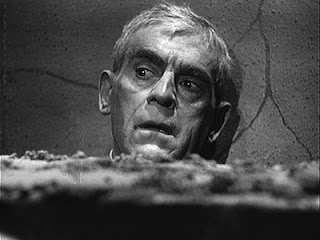