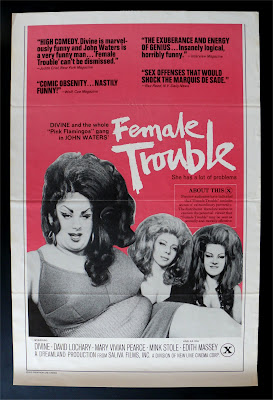 Pink Flamingos was a giant success for John Waters. Female Trouble being his next film, I'm sure he had a lot of weight on his shoulders. Was the world really ready for his brand of trash cinema or did he just get lucky like Damiano with Deep Throat?  Either way Female Trouble upholds the level of filth that Flamingos gave us and still manages to be fresh.

Female Trouble is set in the 60's and its quite hilarious to see Divine as Dawn Davenport with a bee-hive haircut and a sheer green Mu mu. All Dawn Davenport wants for Christmas is a pair of cha cha heels and we all know that "nice girls don't wear cha cha heels!" Plus Dawn has been a very bad girl. Eating Meatball hero's in class and smoking in the girls room. When Dawn doesn't get her cha cha heels for Christmas she smashes the place up and beats up her mother, leaving mom bruised up in a pile of smashed gifts and a knocked over Christmas tree. Dawn runs away and is immediately raped by herself. Yes that's right Divine plays two characters, a male and I guess a sort of female and its pretty amazing watching Divine rape herself. After the rape Dawn finds herself pregnant and she gives birth to a total brat named Taffy, played by Mink Stole. 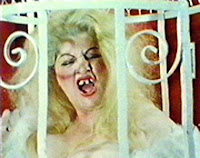 Edith Massey also shows up in here as a lesbian and in one of the films most disturbing scenes Massey fondles her naked breasts in front of the camera. The rest of the time she walks around in tight black spandex until she is locked in a cage and has her arm chopped off.
We get the usual John Waters insane dialogue where every line is a perfect trashy quote. "Queers are just better... I worry that you will work in an office, have children, celebrate wedding anniversaries. The world of heterosexuals is a sick and boring life.". We also get the usual Waters serial killer talk "I blew Richard Speck" and of course an extreme tacky wardrobe. The soundtrack is awesome as usual with a great title song and a track from Nervous Nervous called Dig.
Although she doesn't eat dog shit in this one Divine's character is more depraved then ever. By the end of the film she has a giant Mohawk and her face is all scared up from acid. She is a thief, a murderer and she believes she is beautiful. You just have to laugh at this stuff. She eventually has a trial and is convicted to death row where she will get the chair.
One of John Waters best. A total snotty, disgusting trash-fest right out of the sewer. 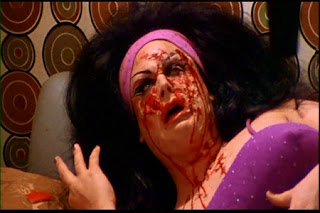