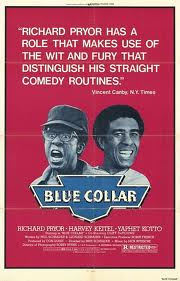 Paul Schrader (Taxi Driver, Hardcore) writes and directs this racially charged tale of three union workers. Richard Pryor, Harvey Keitel and Yaphett Kotto (Truck Turner) are three working stiffs who just can't get by in the rat race. Their families rely on them for financial support and their union isn't making them rich. After a night of cocaine, alcohol and prostitutes the three men decide to perform a heist and steal the safe from their very own union office. The men find themselves in more trouble then the bargained for when they learn what is in the safe. The safe holds information of illegal happenings within the union.

Watching Pryor and Keitel together is amazing on its own. Throw Yaphett Kotto in there and there is no way the movie can go wrong. Pryor does his thing and fills the screen with energy and witty dialogue while Keitel plays the perfect role of a desperate working class man with not much to lose. Blue Collar deals in intense social messages ranging from race, class and of course position. These three working class friends are being held down by the corrupt politicians and rich union foremen. They feel their backs are against the wall and the only way to get ahead is to resort to crime but the big criminals are the men in the suits and ties who have a lot more power and are a lot more dangerous. " They pit the lifers against the new boy and the young against the old. The black against the white. Everything they do is to keep us in our place." 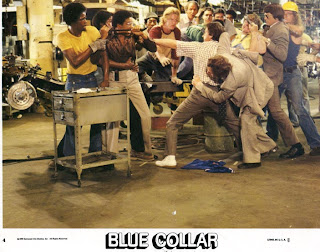