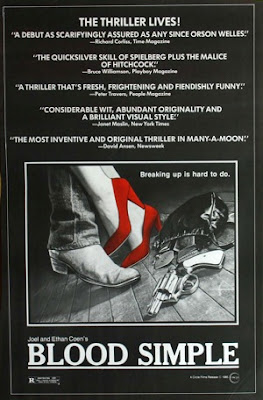 Personally I have never been the biggest fan of the Coen brothers. I feel that their movies have a strong plot but still tend to not be the most entertaining of movies. Their films tend to have a very subtle pace with awkward moments of silence which appeals to me since I am a huge fan of 70's cinema but it limits the replay value of most of the coen brothers films for me.
Blood Simple has the same format. Its a creepy thriller about a rich club owner who hires a cowboy to kill his cheating wife and her lover. The cowboy murders the jealous husband instead and takes his money.

From here on the movie is filled with twists and turns. There aren't many characters in the movie but nobody trusts anyone. The lovers start second guessing each other and the cowboy is still at large. At times it seems as if the dangerous/jealous husband is still alive and the film doesn't allow the viewer to figure out the ending. All we know is the future is going to be as bleak as the awkward silence of the film. When its all said and done their is only one surviving character and the film kinda has an irrupt ending, similar to No Country For Old Men (A much more recent Coen brothers film).
Blood Simple is by no means a bad movie. Its worth watching at least once it just isn't the type of movie that could be watched often. Its kind of a mix between John Carpenters often ignored Someones Watching Me and Brian De Palma's Gialo-esque-thriller Dressed To Kill. Its the perfect film to watch alone but not the best of choices to entertain a house full of friends. 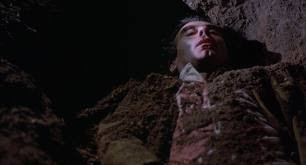