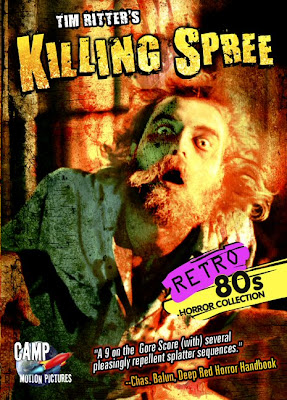 This Tim (Truth Or Dare : A Critical Madness) Ritter camp gore-fest was shot on 16mm and blown up to a Texas Chainsaw Massacre 35mm but this thing doesn't come out looking anything like Hoopers gritty classic. The film quality on this thing is so low that Killing Spree comes out looking only a step above video. Despite its shot on video look. Killing Spree is a bit of a guilty pleasure of mine. 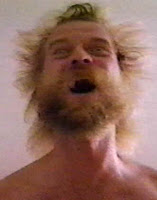 Mainly because of the ridiculous looking main character. The characters name is Tom Russo and hes played by a man named Asbestos Felt. Unfortunately Mr. Felt only has three credits to his name to date and they are all Tim Ritter movies. I don't know how he looks in his other roles but in this one he has so much hair. Between his crazy GBH style hair cut and his totally out of control beard. There really isn't anymore room on this mans head for hair. Then when he gets crazy and is about to go on a Killing Spree, they put him under a red light and they mess his hair up even more and he makes some crazy faces and goes into a sort of shaking convulsion. We also have the privilege of seeing this man in black spedo man-panties. Trust me it makes for a very odd scene.

The main problem with Killing Spree is it has the world thinnest plot. I have seen more elaborate stories in pornography. Killing Spree is the tale of a man (Tom Russo) who goes on a Killing Spree when he finds his wife's diary. He kills off all of the men he believes his wife has cheated on him with and that's it. 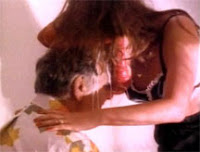 Where Killing Spree lacks in plot it makes up for in gore. Its a totally ridiculous splatter-fest, with decapitated punk rockers, monsters with huge mouths (They give great head),  Lawnmower-fu, complete with finger dismemberment and brain damage, gut wrenching, intestines spilling, death by ceiling fan with machete blades, electrified guts, drowning, screwdriver through the top of the skull, a old lady gets a claw hammer through her chin and has her face ripped off, Zombies, etc.
Surprisingly there is no nudity in this one. We have lots of scenes of Tom's wife in her bra, panties and bathing suit but no naked flesh at all.
This one made it on to the I Will Dance On Your Grave box set and is probably the only one in the set with any value to it. On the other hand Killing Spree is completely mindless and should be skipped by anyone who  is looking for anything more then a shitty gore flick a ridiculous main character. Speaking of ridiculous characters keep an eye out for the fat guy in the cowboy hat. Why is he grabbing his package and doing a blaxploitation act? 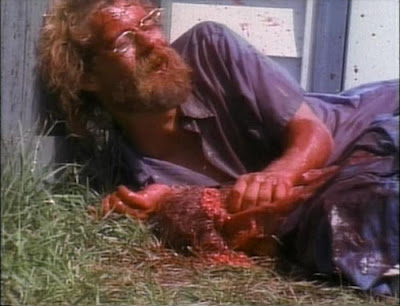 Email ThisBlogThis!Share to TwitterShare to FacebookShare to Pinterest
Labels: I Will Dance On Your Grave : Killing Spree, Killing Spree, Splatter Flicks