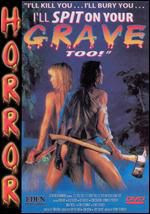 It'a shot on video (S.O.V.) and it looks like it came out in the late 80's early 90's. Either way the movie pretty much sucks. Five of the ugliest people you could ever cast in a film take off to some shit-hole cabin in the middle of nowhere and they start getting killed off one by one by a slasher maniac in a army get-up that was ripped off from the far superior Slasher flick The Prowler. 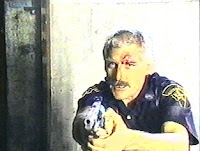 With a title like I'll Kill You... I'll Bury You... I'll Spit On Your Grave Too!, it is obvious that they are trying to suggest this is some kind of a sequel to the amazing Meir Zarchi Rape/Revenge 1978 cult classic I Spit On Your Grave. Of course it is all just a marketing scheme and the two films have absolutely no relation. I picked this one up a long time ago in a boxset of mainly shot on video throw away movies. The boxset itself was marketed with I Spit On Your Grave in mind. The set was called I Dance On Your Grave and the best film in the whole crappy set is a movie called Killing Spree. I guess the DVD packaging worked because I was drawn to the title and cool cover art and that's why I was forced to sit through garbage video movies like this one.
I'll Spit On Your Grave Too has a pretty cool opening with a couple having sex in a camper until they are interrupted by a psycho with a chainsaw. There is a few other entertaining gore scenes. One involves a wood chipper and the blood and meat goes flying and splatters all over a pickup truck. Then we get a nice effect involving a pitchfork (again ripping off The Prowler). We also get a not so good looking nympho who can't keep her clothes on. There is also a lot of continuity in this one and the acting is horrendous. So unless you have some sort of sick fetish for really bad s.o.v. movies with awful acting, ugly people and a generic plot, I would stay far away from this one. 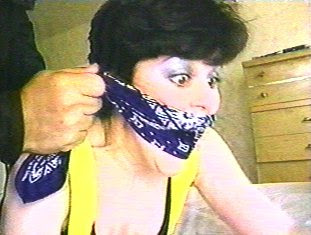 Email ThisBlogThis!Share to TwitterShare to FacebookShare to Pinterest
Labels: Ill Kill You Ill Bury You Ill Spit On Your Grave Too, Psychotic Killers & Madmen, Slashers