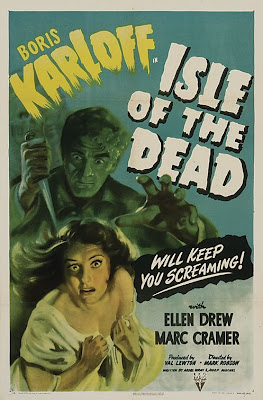 You really have to be in the right mood for this one. Its a little on the boring side but the story is very good, with strong characters. Isle Of The Dead stars Boris Karloff as a British General who is trapped in a house on a small island in Greece. The plague has infected some of the people in the house and Karloff quarantines the perfect strangers. He threatens to kill anyone who tries to leave the house because he can not risk the plague spreading to any of his soldiers.

The thing that makes Isle Of The Dead so interesting and appealing to me is that every character has their own beliefs. Some believe in science while others believe in god and the super natural.
For me the real horror is showing the war between science and religion and the fact that an idea can spread as fast as the plague and do just as much damage.
Karloff's character is a man of logic and science and he is appaled at the fact that the people he is trapped with believe the plague to be the work of a evil spirit. An old woman in particular rants about how one of the girls in the house is a sort of demonic vampire. This infuriates Karloff and causes him to further alienate himself from the others. This is until Karloff's character becomes sick himself and the influence of the others finally corrupts his mind. This is when peoples lives are really at risk.
Isle Of The Dead is only worth watching for its subject matter. Its the perfect movie for anyone who looks at religion and finds it to be completely insane. Otherwise I'd just skip it. 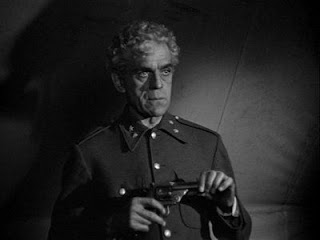 Email ThisBlogThis!Share to TwitterShare to FacebookShare to Pinterest
Labels: Epidemic Films, Isle Of The Dead, Vampires