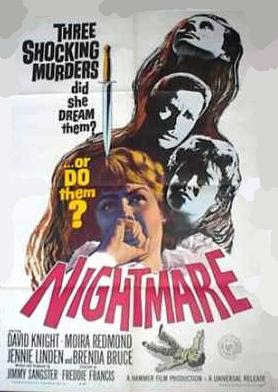 This one also went under the much cooler title, Here's the Knife, Dear: Now Use It. If William Castle was the low budget Hitchcock then Nightmare (1964) is a big budget William Castle. Well okay I wouldn't go as far as to say big budget but there certainly is some production value going on in here. We have some very good acting. A nice crisp picture on black & white film using shadows and lighting for atmosphere. The story was well written, filled with twists and turns. We also are treated to nice camera work and when we add these things all together we get a creepy little British horror film called Nightmare.

For me the most surprising element to this picture is that it was a Hammer film. Not particularly being the biggest fan of Hammer films, I was quite pleased with this impulse buy. As I mentioned before I couldn't help but be reminded of some of Castles films from this era. Stuff like I Saw What You Did And I Know Who You Are. For some reason even The Tingler came to mind, which really doesn't make much sense considering The Tingler is a campy monster flick where this one is a well written horror/mystery. Still I feel that William Castle fans will be happy with this one.
Its the story of a high school girl who is haunted with the memories of her 11th birthday. She had her presents, her birthday cake and the privilege of watching her mother slay her father with a big kitchen knife. Her nightmares get worse and worse until she can no longer tell dreams from reality. Of course it doesn't help when money hungry scumbags are playing little tricks on you and trying to drive you further into madness. Needless to say there is a few more kitchen knife slashings and stabbings and there are a few moments that are sure to get a jump out of you.
Check it out if you're in the mood for something a little less on the campy side and a little more on the creepy, eerie, mystery side.  From the same director who did Tales From The Crypt (1972) and Dr. Terrors House Of Horrors. 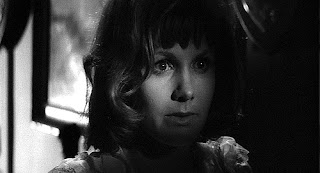