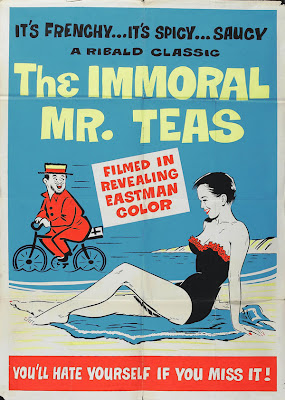 "Tease"! You're not kidding the movie is a tease. I felt like somebody was poking me with a stick through the whole movie and that wasn't the kind of tease I was looking for.
This was Russ Meyer's first full length feature film and its pretty obvious. The whole thing comes off as one big annoyance right from the films opening. It was shot silently and then some narration and demented music was added in.
The 63 minute nudie cutie follows a pervert named Mr. Teas around as he goes about his daily business of looking down girls shirts, watching girls on the beach and spying on big breasted babes in sweaters make out with their boyfriends. 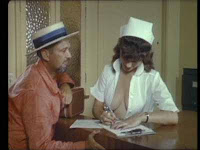 Mr. Teas goes in and out of day dreams where he pictures the woman around him naked. The film does have quite a bit of bare breasts and bottoms but the overall annoyance of the pace, music and narration just over laps any redeeming values that the film might have had.
I am perfectly aware that The Immoral Mr. Teas is an American film in 1959 that shows naked women and it didn't quite fit into the Nudist Camp film genre and that maybe it was an important film in exploitation cinema but this film had me praying for Doris Wishman's Nude On The Moon.
Russ Meyer would go on to do lots of great films, Mudhoney, Beyond The Valley Of The Dolls, Faster Pussycat Kill Kill, Motorpsycho etc. but The Immoral Mr. Teas is not one of them. There is a scene where a big boobed naked woman strums a guitar on the beach that will having you grinding your teeth and begging for a painless death.