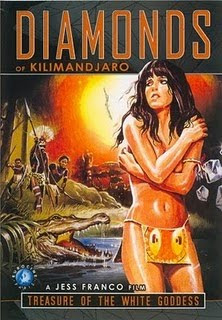 Another piece of crap from Jesus Franco. This Amazon Girls flick is one out of the thirteen or so films that Franco put out in 1983. I'm pretty sure I haven't seen any of his others that came out that year but its a little hard to keep track of a man who has directed about two hundred movies. I'm still trying to figure out if like more Franco films then I dislike. Right now my tally is looking pretty negative.

This one is pretty damn boring straight through. Its not a cannibal flick but it does take place in the amazon. I suppose it would fit into the slim Women In The Amazon genre. Its about a group of explorers who are searching for gems in the jungle. They stumble across a  bare breasted white girl amongst the black natives. The girl along with her father went down in a plane crash and the couple have been missing ever since, The nudie white girl is worshiped by the black natives and is believed to be their goddess.
My question is, if this girl has been missing for so long and running around with no clothes on... Why does she still have tan lines on her breasts? Anyway the nude girl is kind of like the female version of Tarzan. She is one with the animals and she swings from tree to tree with a hell of a battle cry.
The film also offers up a bit of decapitation and a really funny chase scene involving a hungry alligator and a naked bimbo. The alligator gets shot down is stock footage that matches up worse then a Ed Wood film. We get a total of three naked women and a monkey pops up from time to time and makes faces at the camera. The films final has a strange social message to it about the oppression of the black man and the evil whites.
I'm going to stop writing before I make this thing sound better then it is. If you want Women In The Amazon, check out Man From The Deep River. I would skip this one at all costs. It really has nothing going for it, 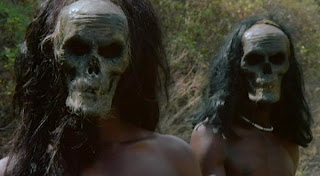 Email ThisBlogThis!Share to TwitterShare to FacebookShare to Pinterest
Labels: Diamonds Of KIlmandjaro, Jesus Franco, Women In The Amazon