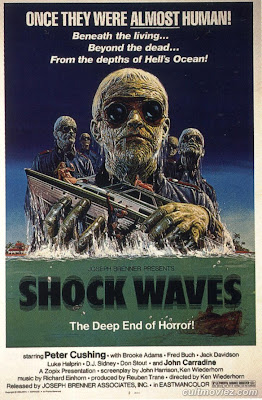 The opening title sequence isn't open for much suggestion here. Shock Waves blares across the screen with a giant Swastika underneath. It flashes in bright colors and is sure to catch the attention of everybody watching.

Yes we are dealing with Nazi's here. Nazi-Zombies to be exact and as far as I know this is the first Nazi-Zombie flick to take place under water.

Of course Jean Rollin's Zombie Lake would be the other water logged Nazi Zombie flick that everyone remembers. While Zombie Lake is an all out exhibition in Eurotrash cinema Shock Waves is actually rated {PG} and is far from an exploitation movie. Instead it goes for classic style scares through music, imagery, acting and action. It actually works pretty effectively. Sure it would have been nice to have some tits and ass from the Margot Kidder look alike leading actress and some gore and splatter is always a nice addition to any zombie flick but for this reason Shock Waves is something different. Something unique. It stands on its own as a good horror film.

John Carradine plays the captain of a ship who lands six people on a deserted island that is inhabited by genetically engineered Nazi-Zombie-Soldiers who have been surviving under water.

Carradine has a bit more screen time then usual and the film makers definitely got their moneys worth from the old timer. Usually by this time Carradine would show up for a quick cameo, grab his paycheck and run. Then third rate film makers could slap his name to the title card and hope to sell more tickets to their B-movie. Not Shock Waves... John Carradine goes above and beyond. They get him in a bathing suit for his under water death scene and he is even carried by a group of young actors who leave the frail actor laying half nude on the beach.

Peter Cushing plays a S.S. commander. The one who is to blame for the zombies running amok. Cushing plays the German accent to the best of his ability which isn't very good but he does come complete with a nasty scar running down his face. He also gets into some action scenes, running from the zombies. Cushing couldn't control the genetically engineered Nazi soldiers during the war and he can't control them now. Cushing also gets a death scene along with pretty much every character in the movie.

Shock Waves may be rated {PG} and virtually goreless but the makeup is still pretty cool. From the simplicity of Peter Cushing's scar to the time consuming water logged zombie look. The makeup is very affective and to say the least it beats George A. Romero's grey face paint gag. We get some rotten zombies and a pretty cool scene where a drunkard has some sharp objects shoved into his face. The makeup was done by Alan Ormsby who did the special effects for Children Shouldn't Play With Dead Things. The director on the other hand went on to do the ultra-cheesy and equally silly Return Of The Living Dead Part 2. Shock Waves is by far the better zombie flick. Its not a comedy and its from the 70's... It must be better!

Originally shot on Super 16mm and blown up to 35mm for theatrical release in true Texas Chainsaw Massacre fashion. Blue Underground's dvd release looks great. Check it out for a creepy time under water with zombies and a strange yellow scene with John Carradine.