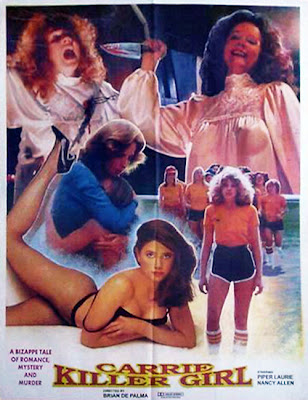 You don't really get more classic then Carrie. It has to be one of the saddest horror films ever made and of course we can thank Steven King and Brian De Palma combined for that. Between King's story and De Palma's masterful direction Carrie comes together as a heart wrenching drama with a horrific climax.

Carrie sports an all around excellent cast. Of course Sissy Spacek does an excellent job as the lead actress, who plays Carrie White a telekinetic teenager with a psychotic, religious mother. The kids in school hate her and she will eventually have her revenge through her super natural powers. Piper Laurie (The Hustler, Trauma) plays the insane mother of Carrie and her screen presence is creepy to say the least. Brian De Palma favorite Nancy Allen (Dressed To Kill) plays the hot highschool bully/bitch who gets her rocks off on tormenting Carrie. A young John Trovolta shows up as the "Dumb-Shit" boyfriend of Nancy Allen. This is only the second film that Trovolta has ever appeared in and he takes on scenes in which he slaps his girlfriend around, drinks and drives, kills a pig with a sledge hammer to the achy-breaky skull and meets his fate in a violent crash and burn car accident. P.J. Soles who most would probably remember best as the naked teen in Halloween who gets strangled in the infamous "Can I get your ghost Bob" scene or Riff Randel from The Ramones and Roger Corman collaboration Rock 'N' Roll Highschool also shows up as a mindless teenage follower who joins in on the heartless bullying of Carrie White. We are also blessed with the screen presence of one of cinemas most awkward and bizarre actors of all time. The great Sydney Lassick who I remember best as the cry baby lunatic who goes bats and screams "I want my cigarettes" in One Flew Over The Cuckoo's Nest appears as a nerd-tastic teacher who enjoys teasing Carrie in front of the classroom. Mr. Lassick gets what he deserves and is fried alive in one of the films most memorable moments.

Carrie mixes the wrongs of religious fanaticism with the cruel realities of highschool kids. Carrie's home life sucks. Carrie's social life sucks. Even the walls in school are graffiti with rude gestures. Watch for the scene in the gym when the janitor is cleaning the doors. "Carrie White eats shit" is written on the wall. Anybody who has been to school has seen kids doing horrible things to other and usual innocent kids. Carrie finally catches a break when a boy asks her out to the prom. What happens after that is just heart breaking but it all comes together with a highschool massacre. Everybody dies. We have people being crushed with heavy objects, electrocutions, explosions, stabbings and an amazing Crucifixion scene.

Of course they made a shitty sequel to this in the 90's that just isn't worth the time or effort. The also did a remake in the 2000's which I haven't seen and really don't want to. Some claim it to be more accurate in the sense that it is closer to Steven King's novel. Well I remember when they said that about The Shining. Need I say anymore? Skip church and stick with this 70's classic or else "they're all gonna laugh at you".

Email ThisBlogThis!Share to TwitterShare to FacebookShare to Pinterest
Labels: Carrie