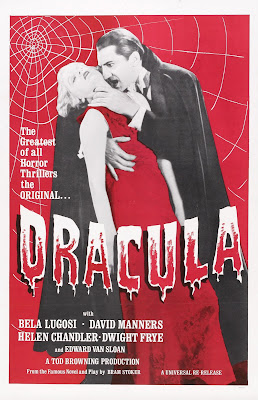 Dracula, the movie that made Bela Lugosi immortal. In the film he can be killed with a stake through the heart but due to this film Bela Lugosi's name will live on and he will forever be remembered as the count in the black cloak. 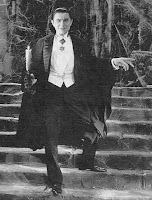 This 1931 early talking film from Universal Studios comes from the brilliant silent film director Tod Browning. Most would argue but I personally feel that outside of Freaks which would be released one year after Dracula his best work was done in the silent era. Movies like The Unholy Three and Alonzo The Armless just seem like they came natural to Browning where it is obvious that Dracula really should have been silent as well.

Tod Browning did not feel comfortable with the new talkies and in my humble opinion it really shows through in Dracula. The classic vampire tale is still a good film but it has a weird pace and awkward silence that flows with it. For this reason I prefer Browning's earlier work or even Nosferatu (1922) over the Lugosi classic. As a kid Frankenstein always appealed to me more then vampires. I still am not the biggest fan of the sharp toothed monsters today, despite my lifetime horror obsession but with that said Dracula is amongst my favorites in the vampire genre.

Comfortable or not Tod Browning's direction is excellent. The sets are fantastic and creepy and Gothic. Castle Dracula obviously set in Transylvania is very dark with shadows and massive amounts of spider webs. Perhaps one of the biggest single spider webs in cinematic history. The castle is full of bugs and giant rodents. Rats, possums and even armadillos scatter around with insects and Dracula's brides. These scenes are morbid, creepy and dark and it really is to bad that Mr. Browning couldn't have made the movie that he would have been more comfortable making.

Initially Tod Browning wanted to use long term companion and brilliant character actor Lon Chaney but unfortunately the man of a thousand faces met his death before Dracula started production. One can't help but wonder what would have happened if Chaney got the vampiric lead role. History would have been completely rewritten. Would Dracula have been the major success that it became with Bela Lugosi? If not, would Frankenstein have been made? If not, would there be monster films today? Its one of those things that you can think about for hours. Either way Dracula is a timeless classic that is here to stay unlike some of Browning's long lost vampire films from the silent age. I want London After Midnight and then I will know for sure if Dracula would have been better if done without sound.