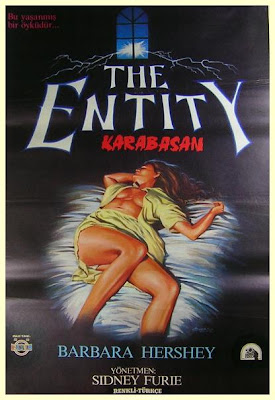 The Entity is an early 80's horror film that is based off of a true story. It wasn't intended for this ghost story to play like an exploitation movie but for many cult fans like myself this thing is total exploitation.

Barbara Hershey plays a single mother who is being haunted and terrorized by a ghost. The ghost is quite the horny fucker and he rapes Barbara Hershey repeatedly. Obviously she seems to be insane. After all who would ever believe a woman who claims to have been raped by a ghost? It all comes together with some nerdy ghost-hunters who believe her story. We get a really cheesy ending. In fact its just out right bad and in my humble opinion it actually hurts the film. The Entity also runs a bit to long. The final runtime clocks in at 125 minutes. Fortunately for us the majority of the film is pretty entertaining with ghost-rape and other ridiculous happenings. As ludicrous as it all sounds the viewer can almost buy into these absurd scenes of a rapist-ghost. 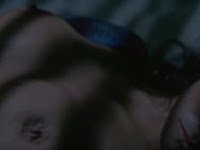 What I'm about to say now will probably earn me a lot of respect from p.c. idiots and feminists alike but Barbara Hershey looks pretty damn good in this movie and while the rape scenes are obviously somewhat disturbing it is also a pretty entertaining watch for pervy bastards like myself who think this invisible-rape shit is kinda hot!

There are lots of rape-happy ghosts in movies. One that comes to mind is Chinese Torture Chamber Story. Even the sickie, Japanese splatter flick Entrails Of A Beautiful Woman seems to have lifted scenes and special effects from The Entity but the truth is that The Entity is the grand daddy of all ghost-rapists and it is also the best.

I find it hard to believe that The Entity was even pitched and marketed as a Hollywood film but it is here and should be watched and enjoyed if not for anything else its totally bizarre plot. The beauty of The Entity is that it can be enjoyed by people who want to take it seriously and then by exploitation nut-bags who think the whole thing is a hoot.

Email ThisBlogThis!Share to TwitterShare to FacebookShare to Pinterest
Labels: Entity (The), Hauntings And Ghosts