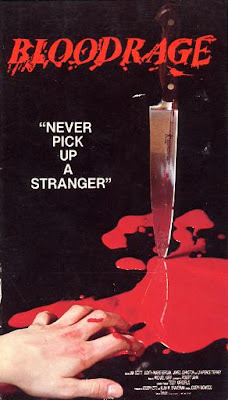 If you had to lump Bloodrage into a certain genre I guess it could be considered a slasher. Sort of... It really is just a horror/drama and stays as far away from a conventional stalk and slash movie as possible.

This one comes from director Joseph Zito who would go on to do the much more gruesome The Prowler and Friday The 13th The Final Chapter. BloodRage on the other hand is a very weird movie. Its slow and virtually bloodless. We do have a sick and twisted killer on the loose but his motive is never really deeply explored. The slow and bizarre pace mixed with the gritty, sleazy atmosphere makes Bloodrage a unique watch. It doesn't really tend to bore, even during long stretches between the murder scenes. The film somehow manages to hold the viewers attention due to the fact that our killer is so impulsive and nothing is ever written out for us.

The film starts off with a prostitute who murdered by a young teenage boy. Her face is pushed through a window and her throat is slit with broken glass. This is one of the few scenes of gore in the whole movie. Our young killer cleans up the scene of the crime and runs off to New York City where he can blend in with the rest of the scum. He is aware that the prostitutes lover was a police officer and that the cops will be after him. Bloodrage depicts NYC as the cesspool that it was. Seedy hotel rooms and raunchy theaters are shown as they were and the degenerates that terrorized the streets stagger passed the camera for an added touch of grit. I guess old habits are hard to break because its not long before our main character is killing hookers again. Most of the murder scenes are pretty lame and might as well just have been off screen murders. The nudity on the other hand is frequent and makes up for the lack of blood. Our killer is a voyeuristic nut. He enjoys peeping into prostitutes windows. That is until they notice him. The he goes in for a bit of the rough stuff. The wildest and most disturbing scene in the movie involves a dog killing. This scene has to be seen to be believed. 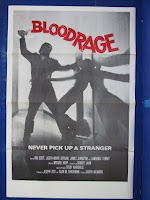 Bloodrage also known as Never Pick Up A Stranger might have the worlds ugliest cast. Our main character is one ugly fucker and we also have this ugly hippie chick who gets naked on screen for some added nausea. This busted up hippie chick makes the Manson girls look like Raquel Welsh. I think the ugly people and the ugly locations just add to what turns out to be a strange, and unusual ugly movie.

It really shouldn't work but it does. It holds very little replay value but is worth a watch for the dog scene and just how strange the final product is. 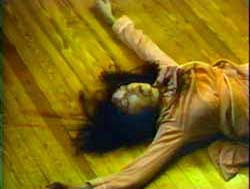