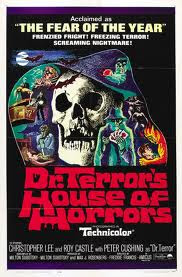 I first discovered this low budget Amicus Production on late night television in my young teens. It stars the familiar British horror duo Christopher Lee and Peter Cushing in some what of a different situation.

Five men on a train have they're fortune told by Dr. Schreck also known as Dr. Terror. Each one of them are doomed to die and a very simple formula for an anthology film unravels. Dr. Terror is played by Peter Cushing and amongst the five other men is Christopher Lee as a condescending art critic and a young Donald Southerland in one of first movies. Dr. Terrors House Of Horrors was released the same year as Southerland's Die Die My Darling but his acting ability shines through much more in this film which is pretty funny considering how bad of a movie this really is but I say bad in a good way. If you like anthology horror films like Tales From The Crypt then Dr. Terrors House Of Horrors is a must see. While it isn't quite as good as Tales From The Crypt it is however the first of Amicus horror anthology films and for that reason alone should deserve a watch.

Three out of the five stories are pretty messy and when I say messy I don't mean gory. I mean plot-wise they are paper thin and full of unexplained moments. What else would you expect from a 98 min. movie that tries to cram five stories into it?

The first story is very confused. It is supposed to be a werewolf story but plays much more like a vampire tale. According to this movie werewolves sleep in coffins and shape shift not only from man to wolf but mist as well. Then we have an awesome nature gone wrong story about a family that is murdered by the plants that grow from the garden. Even the innocent dog meets its fate in the vines of this hungry plant. This probably my favorite segment in the whole movie and every time I watch it I can't help but be reminded of Creepshow. Up next we have the movies most boring and useless story of a man who has a voodoo curse placed on him after he steals some ancient music from the cult. Up next Christopher Lee runs Michael Gough (Horror Hospital, Crucible Of Horror, Legend Of Hell House), whom plays an artist down with his vehicle and leaves him to die in the street. The artists life is spared but his hand was severed in the accident. Instead of leading a meaningless life the artist commits suicide with a bullet to the achy-breaky skull but his dismembered hand comes back to haunt and kill Christopher Lee. This story is a whole lot of fun and makes the whole movie worth while. Last but not least Donald Southerland goes to war with his vampire wife and is betrayed by his best friend. This one comes complete with neck biting, stakes through the heart and typically bad bat transformation scenes but if the first werewolf story was allowed to bend the rules I guess this one can too. For some reason vampires are not affected by sun light in this movie.

This one should only be watched by fans of B-movies. If you take this thing seriously you will surely hate it. Watch only with a cheesy brain and you might find yourself a guilty pleasure.