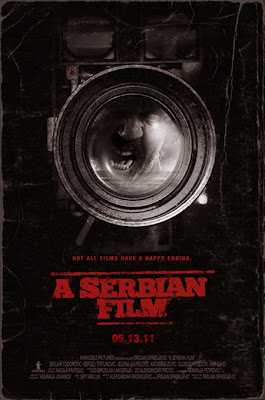 Every couple of years or so there is a new movie out that is high in trend for senior horror aficionados and new-comer lame-brains alike to waste Internet space and conversation on. For instance when Teeth first came around, highschool kids were venturing out to the nearest city that was cool enough to screen the movie. The same thing happened with The Human Centipede. The thing that is so odd is that these people who talk about the new trendy horror piece are the same people who thought I was weird for liking movies like Blood Feast when I was in highschool.

With that said, little of these movies are worth the hype that they miraculously received. I view them as just another exploitation movie. Perhaps since we live in an age where exploitation-art is dead for the most part that when something new and slightly shocking comes around people feel the need to voice their own uneducated and useless opinions.

There are many films that had a huge impact on me over the years. Many in the horror genre and many not. For instance Cannibal Holocaust was a bit traumatic to me when I was thirteen years old. Later on Nekromantik. I was at the point where I believed I had seen it all and nothing new could come around that would take my breath away. Well I was wrong... Here is A Serbian Film.

The subject mater alone is touchy enough to turn the average movie goer off. Throw in the fact that we will be seeing these horrible acts against children in detail and it is enough to turn anyones stomach. A Serbian Film takes violence to a different level but not so much in the graphic department. It is the substance of the plot that gets deep inside the viewer and forces us to feel extreme discomfort. This coming from a jaded cine-maniac like yours truly who enjoys works of art in the macabre.

A Serbian Film will take you on a roller coaster of emotion, torturing you the whole way through. It will leave you speechless and perhaps dizzy. If you ventured into the depraved depths of cinema like Philosophy Of A Knife and made it through this is the movie for you.

This movie is currently a victim of censorship and will probably remain banned in its entirety in America and most of Europe for years to come. Personally being against censorship I can't help but wonder what kind of impact this film would have on society if it was seen at large. The human race being the birth defect that it is would probably misinterpret the film all together. All the self righteous moralists would condemn it and call it smut while the rest of the degenerates would probably masturbate to the sick and twisted baby fucking scenes. Those of us with a brain in our heads could appreciate this nihilistic piece of art for what it is. A statement on a sick decaying world that can't understand the difference between right and wrong, Art and shit, life and death. Some of us are born dead... or at least better off.

Watch it and think for yourself but be warned it won't be an easy sit. Depression is likely to follow.