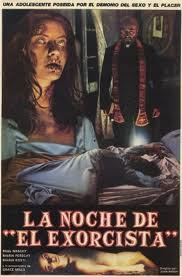 Paul Nashy is best known for his monster flicks or the Waldemar Daninsky series specifically but the man has 100 titles to his name. This obviously being an Exorcist rip-off. 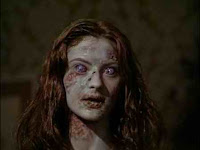 The Exorcist has been ripped countless times in American and European countries alike. Personally preferring the Eurotrash takes on the 73 classic (Eerie Midnight Horror Show) I have to admit I was a bit let down by this Spanish version.

Exorcismo blends elements of a Gialo with the oh so familiar possession tale. We have scenes that reenact (more graphically) the head being spun by 180 degrees. We also get a fair share of breasts and bush from our possessed actress who takes part in satanic rituals. Paul Nashy on the other hand plays the priest who will act out the exorcism against our demonic antagonist who happens to be a close friend of the family to Nashy.

Exorcismo suffers from long drawn out talky scenes that will lead to great boredom and drooling. Unfortunately the tits and ass isn't quite enough to save this thing from being nothing more then wasted space on the dvd shelf.

Exorcismo isn't shocking enough in the exploitation department to hold attention and it is nowhere near as creepy as the real Exorcist. The fact that our possessed girl looks like she is 30 years old takes a lot away from the film too. On the other hand the makeup does look pretty good and the exorcism is amusing to say the least. Wait until you see the reenactment of the spider-walk... Its a hoot!

I really wouldn't recommend this movie to Nashy fans. Its a let down all around. Stick with Nashy's monster epics or at least a trashier Euro version of the Exorcist.