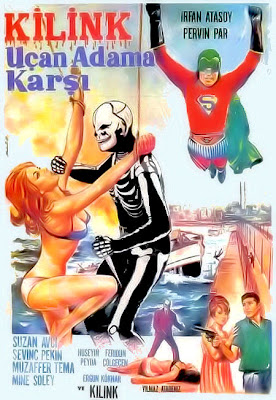 Wow and I thought Mexican wrestling Lucha Libre films were crazy. They pale in comparison to the madness of Turkish super hero flicks. 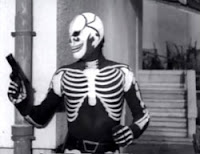 I first learned of the skeleton masked super-villain when I picked up a book on rare horror cinema from around the globe. The book is titled Fear Without Frontiers and a very informative read on rare and hard to find horror flicks from over seas. According to the book the first Kilink movie which was a ripoff from an Italian comic book with a super maniacal villain in a skeleton suit was such a hit that 12 sequels, ripoffs and remakes came out in Turkey the very same year.

Kilink VS The Flying Man also known as Kilink VS Superman is the first official sequel the original (If you can call it that) Turkish film Kilink In Istanbul and takes off where Istanbul leaves off.

This being the very first Kilink film I have seen to date I can not compare it to its successful proceder. What I do know is this is one crazy fucking movie. Right away Kilink is totally different then anything that an American would be used to. The main character is a bad guy and you can't help but love him. He comes back over and over again as if he was Batman or something but instead of saving the people of Gotham City Kilink is killing mother fuckers, shooting doctors, hanging out with hot girls, blowing shit up and torturing women who wont put out. Fucking awesome!

Kilink doesn't really have any super powers. He is basically just a bad-ass criminal in a silly costume. He uses guns and other weapons all the while he has "Shajam" on his tail. Shajam is basically superman. He flies and sports a cape and costume with a giant S on the chest.

These Turk's don't give a fuck about copyright laws and the films make for a bizarre ride. The best way I can describe Kilink VS The Flying Man is if you took one of the weirdest and most disjointed Hong Kong Kung Fu flick you have ever seen like Ninja Death movies where things seem to happen for no reason and threw in some silly Mexican wrestling style super hero's and chopped it all together in the basement with the lights off and a pair of sunglasses on it might come out looking a bit like this.

My dvd is obviously taken from at least two different prints and most likely three for lost footage reasons. The film stock changes moment from moment and its filled with burps, jumps and skips. The first 20 minutes of the film is a maddening recap of Kilink In Istanbul and the films final climax is completely missing. Luckily for us they replaced the footage with still photo's and a voice over narration explains what is going on. This would be a drag in most cases but Kilink VS The Flying Man or Superman or Shajam or what ever the fuck you wanna call him is already insane enough where this almost just adds to the whole experience.

Fans of Santo and The Blue Demon would probably make the best audience for the Kilink movies. I am yet to see another Kilink flick but I might put this just a step above Lucha Libre movies. 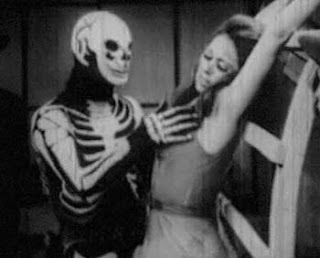 Email ThisBlogThis!Share to TwitterShare to FacebookShare to Pinterest
Labels: Kilink VS Superman, Kilink VS The Flying Man