The Reincarnation of Isabel (1973) 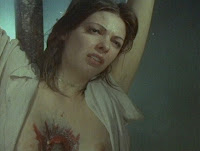 Throw in some weird hippie-dellic moments and lighting that is oddly reminiscent of a Coffin Joe movie with a dream-like pace that could give Jesus Franco a hard-on and you end up with the bizarre concoction of witchery, eroticism, vampires, torture and of course high art. What we do not get is a coherent plot, good acting, or any sort of attention in the continuity department. Scenes change from night to day with out embarrassment and the story is all over the place with no real relevance on time order.

The basic gist is that a group of satanists are cutting out the hearts of young nubile women as sacrifice to Isabel. A witch who was burned at the stake centuries ago. Isabel's lover played by Mickey Hargitay (Bloody Pit Of Horror) places a curse on the village and swears his revenge. Then we have some vampirism going on and things start to get really confusing but when it is all said and done we are treated to a creepy scene involving a woman being buried alive, hearts are ripped from the chest of bear breasted babes, stabbings, really bad makeup, silly satanists in red spandex outfits, bad fire effects and lots of blood drinking. Of course the main attraction here is the nudity and although this film is Italian I would think the best audience for this movie would be fans of Jesus Franco's work.

It can be slow going at times but its weird enough and naked enough for me to give it my seal of approval.