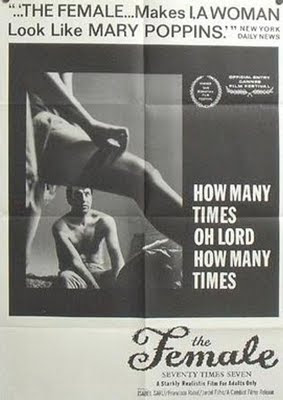 The Female is an earlier work from Argentinian sex symbol Isabel Sarli. It can be found on a double feature dvd from Something Weird Video with the far superior and sexy Fuego. Fuego was my introduction to the beautiful, busty brunette from Argentina and is still my favorite to date. Isabel Sarli having 30 some odd titles to her name and The Female not being a very good one.

Sexy-Sarli plays Cora a prostitute with a nasty scar running down her face. Man after man enters her room in the sleazy brothel which she works in. If you have money you can screw her but you can not kiss her. That will cost you extra. As Cora rolls around with one of her johns she looks up at hole in the celling. She is overly frightened of the hole and I couldn't help but think the Argentinian film makers were inspired by Roman Polanski's Repulsion. Obviously this is not the case considering The Female is three years older then the Polanski masterpiece. None the less The Female tries for something of an artsy-fartsy story but fails.

As other prostitutes in the brothel screw hairy men and suck man-toes in ultra sleazy scenes of sexploitive smut Cora stares up into the hole in the ceiling which takes her into her past. The rest of the film is told through a flashback and I have to admit it is quite the boring flashback.

Cora takes us back to a love triangle between herself and two men in the desert. The three are dying of thirst and dig a well. Cora eventually leaves the men for dead and has her face cut in the middle.

The Female offers up typical roughie style camera work that gives off the impression that the film was shot through a key hole. We get the almost required through the legs shots but it also offers some very nice looking cinematography at times. This is really the only positive thing you can say about the film aside from the trashy close up on toe sucking. The Female is virtually plotless and even worse then that it doesn't show off Isabel Sarli's finner aspects. We might get the occasional nip-slip here and there but there is no intentional nudity. The least they could have done was gave us more cleavage and underwear shots. On top of this the characters are dull as can be and the film might as well have been silent because there is very miminal diologue and not really any score to be heard. Just the sounds of wind and some horses. The Female is a bad example of art and should be avoided.

For a much sexier time with the queen of sex from Argentina check out Feugo. It doesn't disappoint. 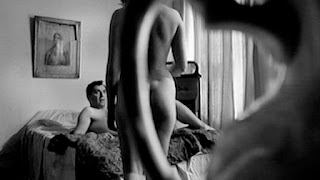