Now this is what I call a shitty movie. Curse Of The Voodoo which also went under titles such as Curse Of Simba, Lion Man and the incredibly inaccurate exploitation title of Voodoo Blood Death is a total shit-bomb about a man who has a curse placed on him by an African tribe known as the Simbasa whom worship Simba the lion god and practice voodoo.

Apparently this thing ran on a double bill with Frankenstein Meets The Space Monster which I have not seen but for the sake of those sitting in the theater I can only pray that it is better then Curse Of The Voodoo or Curse Of The Doo-Doo as I think is the more appropriate fitting title. It comes from the same director who did Devil Doll and stars the same lead actor. However in Devil Doll the ventriloquist has a beard and the actors awful acne is hidden. This is not the case in Curse Of The Voodoo.

Our scar-face hero is placed under the curse for killing a lion in Simbasa territory. When he makes his way back to the U.K. he starts dying slowly and is haunted by Simbasa spirits or something. Nothing of any entertainment happens till the very end when our hunting man goes back to Africa to battle it out with the man who placed the curse on him.

Do yourself a favor and watch Devil Doll instead. This one serves no purpose at all. It is just plain boring. The only bit of entertainment I got from the whole thing was a scene where a dancing black woman is doing her best voodoo-shake in pants that look like they were taken from the 42nd street smut flick Aroused and a moment where a tribesmen is run over by a truck and has his broken body mangled between the tire and the wheel well. Skip it! 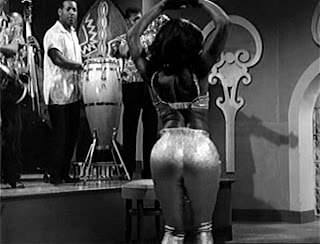