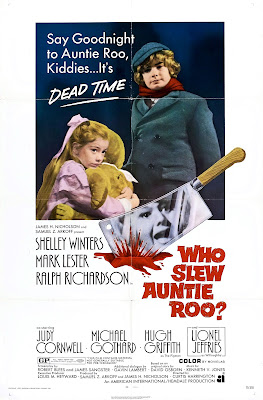 Curtis Harrington, the director of oddities such as Devil Dog : The Hound From Hell and Denis Hopper's Night Tide delivers another Shelly Winters thriller one year after Whats The Matter With Helen?. There is no question about it Curtis Harrington is a pretty weird director and it is quite possible that his movies are from mars but I can not understand what his fascination was with Shelly Winters.

Whats The Mater With Helen wasn't exactly a great movie and Whoever Slew Auntie Roo is significantly worse. Perhaps there was some sort of a contract between the two or maybe they were just friends. All I know is it is a pretty weird combo. Throw American Internationals Pictures into the mix and it is even more bizarre. What the hell did A.I.P. want with this picture? Its extremely soft and doesn't really offer anything shocking at all. Was there some kind of strange Shelly Winters fetish going on at the time that I don't know about?

Shelly Winters plays (yes you guessed it) Auntie Roo... An ex show-girl who lost her beloved daughter. Naturally she kept the corpse and she spends her time rocking the bones of her daughter in a cradle.

This year for Christmas Auntie Roo has invited kids from the orphanage to spend the night in her mansion. She fattens the little ones up and spoils them with presents. Naturally she kidnaps one or two of them and its not long before the authorities and the orphanage are aware of the missing children.

The kidnapped children believe Auntie Roo to be a witch and they reference Hansel And Gretel. The kids believe that Auntie Roo is going to kill them and eat them so they come up with an escape plan.

Considering that this film revolves around children I am sure you could have guessed that there is very little violence. We get a couple of ineffective jump scares and bunch of old style gags. There really isn't much here that can be recommended. For a much better Shelly Winters experience check out Cleopatra Jones... Anything but Auntie Roo. 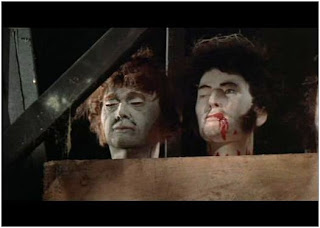