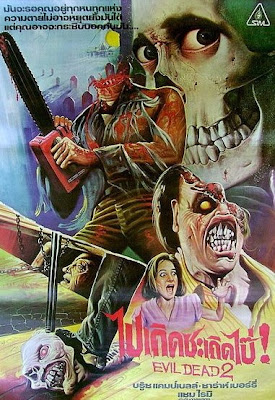 Its always a bad idea to make the sequel to your hit horror movie into a comedy. Evil Dead 2 is one of the exceptions to the rule. Six years after Sam Raimi's incredibly gory and unusually weird Evil Dead, the young director remakes his own movie. This time with a hint of comedy thrown in. Okay maybe a hint is an understatement. This sequel/remake takes Ash (Bruce Campbell) back to the cabin where his friends were all slaughtered in the first film. Naturally nothing of this is mentioned and we just get a whole new set of blood splattered murder scenes.

Evil Dead 2 lacks the nasty, gritty look from the first flick. Unfortunately the flesh on the undead doesn't have that same crusty look that it did the first time around. Still we have decapitations (complete with dancing headless girlfriends), Heads are stomped in and eyeballs come popping out from the socket and go flying across the room into a unsuspecting victims mouth. Even the tree-rape is reenacted. 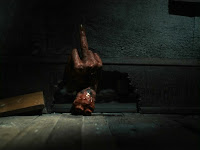 In one of the most memorable scenes Ash's hand becomes possessed and we have the privilege of watching Bruce Campbell smash plates over his own head, smash his face into the walls and floor and just generally beat the shit out of himself. He resorts to sticking a knife through his own hand (complete with splat) and then taking a chainsaw to his wrist, dismembering his possessed hand (Complete with more splatter). Naturally the possessed hand goes on the run and causes some mayhem. The hand gives off some rude gestures to our hero. This pisses Ash off and he shoots it with a shotgun. Next rivers of bright red blood blast our handless hero in the face. If you thought the corridor scene in The Shining had a lot of blood just wait till you see this. It is oddly reminiscent of the scene where Johnny Depp meets his demise in A Nightmare On Elm Street.

Sam Raimi made it a habit of doing scenes from this trilogy over and over in the sequels. In Army Of Darkness (the third film in the series) we get to a recap of when Ash saws his hand off. "Something got into my hand so I lobbed it off at the wrist". Army Of Darkness also had no choice but to continue with more elaborate monsters due to the direction that Evil Dead 2 took the series. This time around instead of typical demons we get more giant monsters and in the films climax Ash gets thrown into a time warp and ends up in Medieval times where he will be forced to fight an army of the undead in the next film.

Evil Dead part 1 is the best of the lot. Its a true horror film that holds back on the laughs. The demons are far more disgusting looking and in my humble opinion the gore looked better. Evil Dead 2 : Dead By Dawn is a fun watch for fans of the first film but new comers to the series really need to start in the beginning.