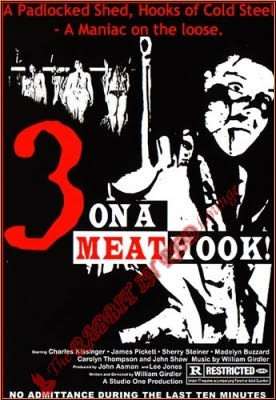 I have never seen a William Girdler film that I didn't like. I am more then half way through his filmography having seen 5 out of his 9 films. Being a fan of Girdler schlock-ers such as Asylum Of Satan, Abby, Sheba Baby and even The Day Of The Animals but I would have to say that this movie is the worst of the lot.

Sometimes I think I'm the only person who realizes these things but if you watch Three On A Meathook and Night Of Bloody Horror back to back, you would have to be blind to not see the countless similarities. The truth is that Three On A Meathook is basically a remake of the 1969 film or at least a big fucking ripoff. The weirdest thing is that Night Of Bloody Horror isn't even a good movie. Why the hell would anybody want to steal the basic outline from that movie? I suppose if the great Mr. Girdler were still alive perhaps some day I would find the answer. Aside from the seemingly endless similarities between the two films Three On A Meathook has a much better title. However the film obviously doesn't hold up to such an exploitative title. We don't even get 3 on "A" meathook. Instead we get three girls on three separate meathooks. Well, thats why we call them exploitation movies.

Despite the blatant lie within the title, Three On A Meathook does deliver the goods. The movie starts off strong with a hot naked blond and a massacre that comes complete with a gory stabbing in a bathtub, two girls blown away by a shotgun and a decapitation by hatchet that has to be seen to be believed.

From here on we step into some very lame, boring and dramatic territory and when I say drama, I don't mean in a Taxi Driver sort of way. I mean, in a bad soap opera kind of way. We get this sappy love story thrown into the mix and the movie lingers on this subplot for far to long, leaving us gore-hounds wondering when the next murder will take place. Eventually the bodies start falling and we learn that the villains are cannibals. We are supposed to get a twist ending but it is seen coming from the start of the film.

Once the murder and mayhem picks back up we get a death by pick axe and a death by meatcleaver. We also get some severed limbs and some more really bad writing. Speaking of bad writing, look for the scene where two girls are bonding over true love. It is almost painful to watch!

A movie that is worth owning for all bad movie lovers. Fans of this movie should be sure to check out Night Of Bloody Horror... That ones even shot in Violent Vision! Who can pass that up? 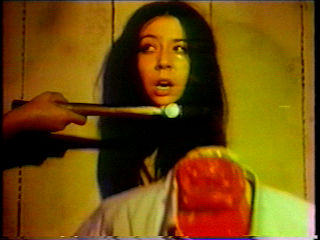 Email ThisBlogThis!Share to TwitterShare to FacebookShare to Pinterest
Labels: 3 On A Meathook, Psychotic Killers & Madmen, Three On A Meathook