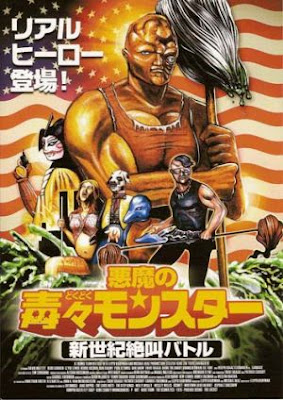 This is the 4th and final movie to date in the Toxic Avenger series and its nice that it didn't follow in the footsteps of Toxic Avenger Part 3 : The Last Temptation Of Toxie because that one is just fucking awful.

This time around Tromaville's favorite hideously deformed creature of super-human size and strength has to fight his evil doppelganger, The Noxious Offender. We of course get the final fight-to-the-death scene but everything in between is just fast paced fun and mayhem. Every frame is loaded with extras in true Troma style and blood & guts and the tits & ass really help this movie just fly by.

In one of the most memorable moments we have a school massacre but the students are all mentally retarded and the killers call themselves the Diaper Mafia. Obviously a joke on those Trench-coat Mafia morons who did the world a favor and shot up all the jocks at school. Retards are blown away with automatic weapons until the Toxic Avenger comes and rips the diaper-punks to shreds. Trent Haaga (Terror Firmer, Dead And Rotting) is disemboweled and has his messy guts pulled from his body. Another punk has a shit filled diaper smashed in his face and then has his head stomped by Toxie (complete with flying brains and shit).

We also get another gross shit moment in a scene where an old woman has her head run over by a car. Gore leaks from her crushed head as piss and shit fly from under her dress. Yuck!

Citizen Toxie also offers up a Street Fighter homage where a mans head is shattered through x-ray-vision, hot lesbian sex, plenty of bare breasted bimbos, Tromeo And Juliet's penis monster returns for some rape action, the original Melvin the mop-boy comes back, syringes to the face, arm dismemberment, leg dismemberment, mop poles are shoved through heads, tongues are ripped out in true Blood Feast fashion, a black man is tied to the back of a truck and dragged through the street in true Coffy fashion, Dolphin Man gets killed, Mad Cowboy gets killed, lots of Nazi's get killed and we have an awesome fight scene between two fetus's that takes place from within a pregnant woman's womb.

Hank The Drunken Dwarf plays God and has this to say "Tell the pope to stop talking about me. He's an asshole! He doesn't know me and his hat looks fucking stupid". Sargent Kabukiman N.Y.P.D. shows up as a drunken rapist who impregnates Toxies wife and we just get plenty of other ridiculous situations that you would only find in a Troma movie. Perhaps my favorite touch in this movie is a character named Tedo who plays the Retarded Rebel. The Retarded Rebel shoots heroin, smokes crack, drinks whiskey and calls everyone around him a pussy. I would like to see the Retarded Rebel in his own movie.