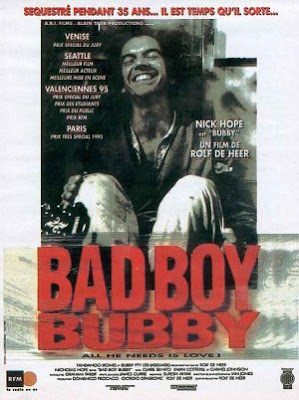 Like art films? If you do, watch this fucking movie. Bad Boy Bubby is an incredible piece of work that makes you think. Its not a pretty picture! Then again it might be... It can be extremely dark with incest, murder, religion, and the cruelty of mankind but at the same time has some of the most beautiful characters that I have ever seen in any movie. Not beautiful in appearance but inner beauty.

The movie follows a man named Bubby who is really more of a child due to the fact that he was kept in a apartment for the first 30 some odd years of his life by his warped mother, where he knew nothing more then what she taught him. His shotty vision of reality changes when he kills his mother with saran wrap and ventures out into the real world. Lets just say the real world is a pretty strange place for Bubby. Perhaps even weirder then he appears to the average man on the street.

Bubby learns more with each person he meets and almost every scene in the movie is unforgettable. From the lighting to the cinematography, the brilliant writing to the intense acting Bad Boy Bubby is a must see for anyone who likes cinema of the bizarre.

There is no doubt that Bad Boy Bubby would offend a lot of people but then again it would only offend closed minded morons who should have never ventured into the world of Bad Boy Bubby. Films like Eraserhead are safe compared to Bad Boy Bubby. Although it is a movie from mars it still makes sense and while one can get many ideas from this movie the over all message is much more clear then you get from films like El Topo.

If you are looking for something different, this is it! Watch it! Love it! Think about it! Or you could always just go to church. Then you will never have to think about anything for yourself. Especially a morbid tale of humanity like Bad Boy Bubby.
"If the poison doesn't get you, Christ will" 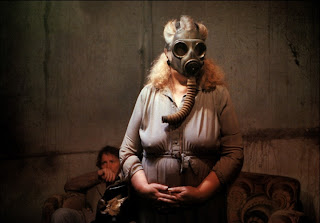