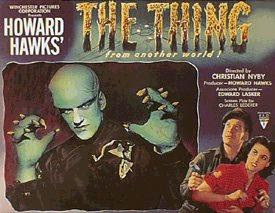 Many have called The Thing (2011) a prequel but that doesn't make any sense. It only works as a prequel to John Carpenter's 1982 remake of this film. The 2011 version completely disregards the original 1951 movie, so how can it be called a prequel?

Personally I believe that The Thing (1982) is the greatest remake of all time. The special effects hold up today and Carpenter's take on this 50's monster flick was so unique

The original is of course an awesome movie too. It also had some daring special effects for the time. In one of the most memorable scenes our monster is engulfed in flames as he runs through a burning room. The fire spreads fast as hell and it took some bravery on the parts of the stuntmen to be involved in this scene at all. In another cool scene we have our monster with electrical current flowing through his head and hands. This effect would be used a lot in the 80's with bright blue computer graphics but its really cool to see this early 50's attempt.

The story follows a group of men on a Air force mission to scope out what they think is a U.F.O. crash landing in the middle of the North Pole. When they arrive at the site the flying saucer is buried deep beneath the ice. Being the bunch of genius's that they are they decide to blow the ice away with a giant bomb. The explosion blows the U.F.O. up with the ice but the soldiers and scientist are happy to learn that a man was thrown from the saucer during the explosion and is frozen in a solid block of ice. When the men take the ice-man back to their bunker to thaw out, they are in for a big surprise.

Little did they know that this alien lives off of human blood and views the human race as food supply. The monster looks like man but he is in fact a vegetable? The scientists learn that he is a sort of highly intelligent plant and plans on making earth a new habitat for the blood drinking plant-men. It is such a silly idea but somehow it worked for the movie. Somehow the audience believes, Yeah he is a giant plant-man from outer space... Sure!

The Thing From Another World offers up a mad scientist who wants to protect the monster, A brunette in a tight sweater as the sex appeal, a Frankenstein looking monster with a bigger head, three dead dogs, plenty of fire-fu, a severed arm (complete with reanimation), two off screen murders (complete with soldiers hanging upside down with their throats cut, completely drained of blood), death by electrocution, breathing plants and an icy-cold atmosphere that will make you reach for the nearest blanket of flamethrower.

Check it out for a good time with killer plant-men and lots of 50's witty dialogue. Stay away from the 2011 remake or prequel or what ever the fuck you want to call it. I call it a waste of time. 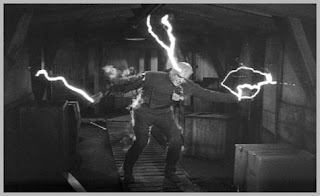 Email ThisBlogThis!Share to TwitterShare to FacebookShare to Pinterest
Labels: Monster Movies, Thing From Another World