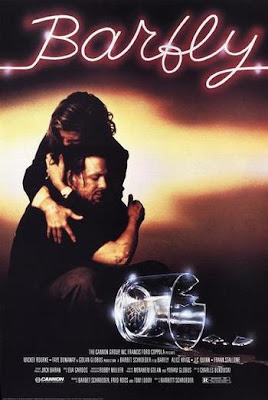 Americas favorite drunkard Charles Bukowski writes what is somewhat of an autobiography here. Okay maybe he is Americas second favorite boozer, under Hunter S. Thompson and what Fear And Loathing In Las Vegas was to Thompson, Barfly is to Bukowski.

Mickey Rourke takes on the role of a half dead Barlfy named Chinaski (but you can call him Bukowski if you like) who lives by the golden rules of drink, fight and write. He is an author who has gone unnoticed until some high society bimbo discovers his work and tracks him down. When she finds him she is appalled to learn that such beautiful writing came from such a distraught man. He truly lives on the fringes of society, roaming the filthy city streets and drinking away his liver in sleazy bars filled with prostitutes and other fellow wastes of life. "Anybody can be a non-drunk. It takes a special talent to be a drunk. It takes endurance." This movie is just chock full of great and memorable quotes.

Fay Dunaway (Bonnie And Clyde) plays Rourke's girlfriend. She is also an alcoholic and a bit of a lunatic but Dunaway fans will be pleased to know that she does show some nipples in a bathtub scene.

Things get really bad for Chinaski when he learns that his girlfriend went home with his worst enemy played by Frank Stallone. Barfly opens up with a fist fight behind the pub between Stallone and Rourke and it also closes out with yet another fight between the two. Not to mention that we get some more drunken fisticuffs between them in the middle.

Barfly is totally a mans movie and would definitely appeal more to a male audience. I think there are two main audiences for this film. The first being Charles Bukowski fans and the second being anyone who likes to drink a lot. "I need a drink like a spider needs a fly". Of course Mickey Rourke fans will also be drawn in as well but there is a level of philosophy that runs with the madness of Barfly that only a true drunk can appreciate. So grab your liquid of choice and step into Bukowski's world. After all any movie that opens up with this line "Some people never go crazy. What truly horrible lives they must lead." has to be good. 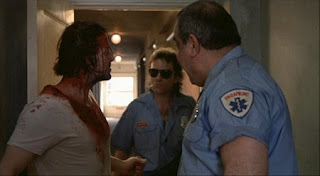