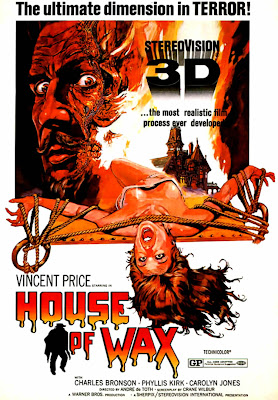 This gimmicky 50's spectacle of 3-D stars Vincent Price in his typical villain role. This time as a bitter artist who runs a (yes you guessed it) wax museum or in this case a House Of Wax. He is on a murderous rampage with his henchmen Igor played by the great Charles Bronson. 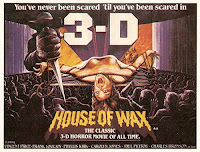 3-D special effects is thrown in our face constantly as paddle balls come flying at the camera along with anything else you can think of. Heavy weaponry, wax figures, fists and human bodies alike.

Perhaps the strangest moment for me was when an intermission popped up on screen from the dvd. Weird huh?

Unfortunately I have never seen this thing in 3-D with the silly glasses and all. Its to bad because I really crave the headache that comes along with the old red & blues. Still House Of Wax is good ole fashioned fun and I am willing to bet money that it is better then the Paris Hilton remake.

Price does a good job here as a a horribly disfigured burn victim who gets his revenge upon society by killing people and coating their bodies in wax and adds them to his collection of human exhibits in his wax museum. His awful face is of course concealed behind a mask of wax but when killing time comes he roams the city streets in his Phantom Of The Opera get-up, complete with cape and hat. 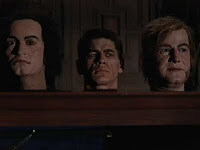 Along side Vincent Price is a drunkard who will supply our mad-man with stiffs as long as a good stiff drink follows and of course Charles Bronson as a deaf mute.

Bronson (as expected) kicks plenty of ass. It takes a whole shit-load of cops to take him down and he doesn't mind getting a bit fisty with the law. Price also has a few impressive fight scenes and knocks out a cop or two before he meets his own fate in a vat of wax. Didn't Bronson kill a bad guy by kicking him into a pit of hot wax in one of the Death Wish movies? A bit of homage perhaps?

House Of Wax offers up a hanging, strangulation, melting was faces, a gag involving Charles Bronson's head amongst wax figures, fist fighting mayhem, and of course lots of 3-D. An important addition for Vincent Price collectors. 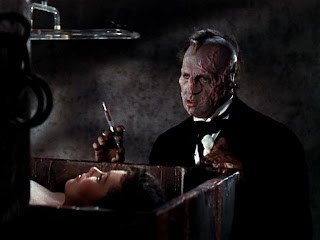 Email ThisBlogThis!Share to TwitterShare to FacebookShare to Pinterest
Labels: House Of Wax