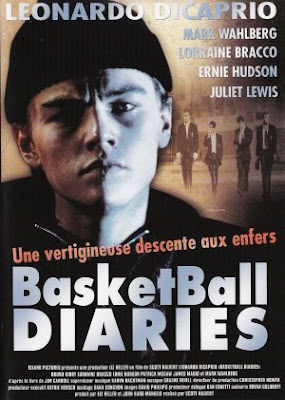 Leonardo Dicaprio takes on the role of infamous junkie, poet, writer, punk rocker Jim Carrol and gives an amazing performance of the true and tragic life that Jim lived. As the tagline says its The Death Of Innocence and death surrounds Jim as he journeys further and further into the dark depths of addiction.

I guess you could really take the quick way out of watching this thing by just playing Jim Carrol's record Catholic Boy. Most of the songs on the record explain the events which will take place in the film especially the song everyone knows and loves him for People Who Died. Its almost like listening to Lou Reed's Take A Walk On The Wild Side or watching Andy Warhol's Trash.

Being a fan of cult movies and exploitation cinema I have never been able to understand what it is that I like about Dicaprio. He plays in big budget Hollywood movies that I can't stand with few exceptions like Critters 3 : You Are What They Eat but there is just no denying that he is a talented actor. Its to bad he is casted in such bland movies for the mindless mainstream because what ever he does, he does it well. Remember him as the retard in that stupid fucking Grape movie?

Basketball Diaries sets itself aside from all that other shit. While its still a big budget mainstream movie it deals with a subject that most Americans would rather not think about. The fact that the youth is starting younger and younger with drug use and become young criminals. Dicaprio's character is so desperate in this film that he begs, steals, fights and even prostitutes himself out for a fix.

Some of the highlights that Basketball Diaries has to offer are homosexual gym teachers, priests who get off on beating young boys, a priest is blown away at close range by a shotgun, male and female prostitutes alike, gratuitous heroin use and other assorted narcotics as well, a kid jumps to his death from a city building, a old woman is punched, kicked and robed, flying vomit which lands on an angry construction workers head, religious conflict and a cameo from the real Jim Carrol.

Less humorous but in the same vein as Trainspotting. Fans of junkie films like Sid And Nancy are the true audience for this movie. Its as fun as a spike through the arm. 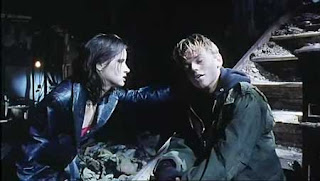