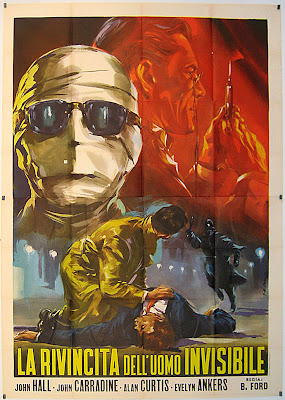 John Hall (Invisible Agent) plays the invisible man yet again. Of course the two films have no real connection as far as the plot or character goes but of course we feel compelled to compare them. I personally feel that this film is the weakest out of all of the Universal Studios Invisible Man flicks and that is mainly due to the lack of an interesting plot. 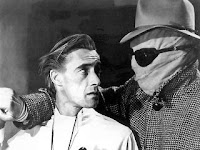 John Hall becomes invisible when he meets John Carradine who plays a mad scientist with the invisible serum. When Carradine learns that John Hall's character is a fugitive on the run he convinces him to become invisible. Of course the invisible man has no interest in science but will use his new invisibility to get revenge on everyone he feels has wronged him.

Unlike the original 1933 Invisible Man with Claude Rains, John Hall's character was already insane. In fact he murdered two people in a "Psychopath ward" with a kitchen knife. Now armed again with a sharp knife and invisible as well the man is ten times as dangerous. Carradine gets killed off by our invisible villain in a really cool scene involving a blood transfusion. The invisible man drains every last drop of blood from Carradine's body and then compares himself to Dracula (Which we all know was the Universal Studio flick that spawned all these great horror classics throughout the 30's & 40's).

Next Carradine's pet dog who was invisible in the beginning of the movie goes after the invisible man to avenge its owners death. Once the dog regains visibility it turns out to be nothing more then a German Shepard but when we couldn't see the pooch, it seemed to be the worlds scariest animal. None the less it was a pretty interesting twist to keep the invisible man on the run from an animal and pretty funny as well because John Hall's character fears no man but is terrified of Carradine's dog. For some added laughs watch for the string that is tied to the dogs fangs that pulls his head upwards for the howling-at-the-moon scenes. I know these invisible-man flicks are always jam packed with very visible strings but did they really have to go as far as to rig the dog up to one?

The Invisible Mans Revenge adds in the expected humor in a few scenes but for the most part is played very straight. I said it is the weakest film in the series but it is also a very strong series so its still a fun watch and better then most of the Universal Dracula and Frankenstein sequels.  In other words, The Invisible Mans Revenge is still worth a watch for fans of the series. 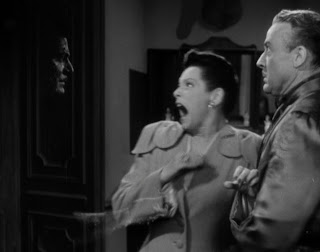