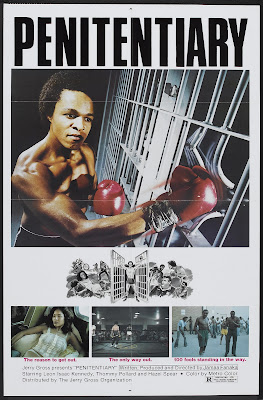 Awesome blaxploitation film that takes place almost entirely inside a prison. Written and directed by Jamma Fanaka (Soul Vengeance, Penitentiary 2) and tells the tale of a black man named Too Sweet who is imprisoned after being attacked by two bikers and killing one in self defense. Naturally the fight happens amongst white folk and since this is the 70's its safe to say they were racist white folk.

This jail is full of some crazy motha-fuckers. Upon Too Sweet's arrival to the big house he encounters some nutty bastards. One of them keeps lit cigarettes in his ear, not behind his ear... In his ear, and asks fellow cellmates for a "light". Then we get this crazy dude who covers his face with shaving cream and in a fit of rage demands to see the jail-house-punks ass. Things get worse from here on when Too Sweet's manhood is threatened by the degenerate rapist who bunks with him. Apparently in prison you should never except a candy bar from a cellmate because this means they are going to take your man-ass by force. Too Sweet being the bad-ass mother fucker that he is kicks the shit out of the rape-happy, candy bar guy and makes it known that he ain't nobodies bitch. 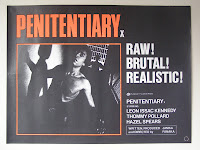 Next Too Sweet befriends a coward and teaches him to stand up for himself. This brings a whole world of trouble for Too Sweet and it becomes apparent that his stay in the big-house is going to be a rough ride with many enemy's.

Eventually Penitentiary turns into a boxing movie that makes Rocky look like The Sound Of Music. A boxing league is formed and the winner gets to spend the night with a woman. There are some good looking chocolate mama's in this flick and we do get some naked flesh. The fight scenes are pretty cool as well and while its not quite Raging Bull, Penitentiary makes for a good knock-em-out flick. We also get some awesomely typical blaxploitation dialogue and the big life affirming speech comes from an old man who has spent almost his entire life behind bars. There is also a bit of an unexpected twist in the plot which was nice to see and makes Penitentiary perhaps just a step above the average 70's blaxploitation film.

Apparently the sequel is even more entertaining on a much more exploitative level but I have not yet seen that one. However it is on the list of things to watch before I die and the sooner the better. This movie makes prison look scarier then any other with the exception of maybe Zombie Death House and if I learned anything it is to keep your ass out of jail. 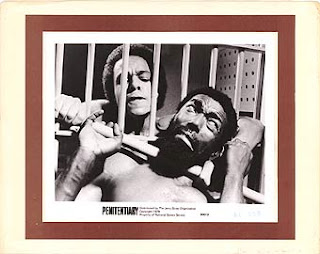