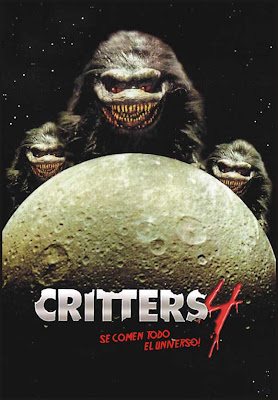 Here it is the last and final film in the Critters series and what a fucking disappointment. I guess when you make a movie like this you know its time to call it quits. No need for a 5th apology film. Just give up!

This one takes up where the third film leaves off. Charlie is about to destroy the last two eggs when he is interrupted by his old bounty hunter friend. Charlie takes the remaining eggs to space with him where of course they hatch and wreak havoc one last time. The whole movie takes place in a spaceship and it is about as boring as it can be.

Brad Dourif (Childs Play, One Flew Over The Cuckoo's Nest) shows up but doesn't manage to make the movie any more tolerable.

I'd say the only redeeming moment in the whole movie is a shower scene where we get some boobage and a soapy ass-crack from Angela Bassett. Not that Angela Bassett is anything all that special but that's how bad this movie really is.

The gratuitous nudity in Critters 2 added for extra points but the tits and ass in this movie is the only thing that kept me from turning it off completely.
Of course we get a some kills from razor-toothed fur-balls from space but nothing very memorable or overly gory. What else would you expect from a shitty 90's movie. The director never went on to do anything else and I guess we can be grateful for that.

Fans of the Critters series be warned. Stay away from this flick. The only excuse for owning this one is the fact that it is sold in the Critters boxset. 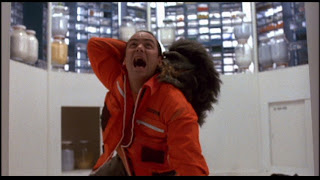