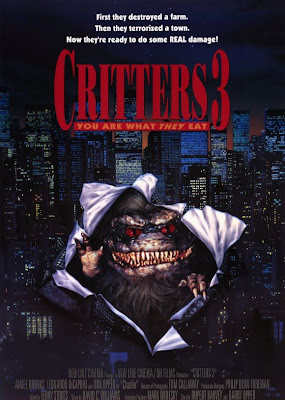 Okay so here we are, the third film in the Critters series. Personally being a fan of childish Gremlins-ripoff flicks and when I say childish I mean for children. The entire Critters series is rated {PG13}. The first is the softest of the lot. With only one or two deaths and no real gore or anything like that. Critters 2 on the other hand stepped up the bodycount a whole lot and added in way more violence and red stuff. It even offered up gratuitous nudity from a bare breasted blond bimbo but became way more silly and slap-happy in typical 80's fashion.

Now we step into the early 90's with Critters 3 and the comedy level is way down. However it was directed by a female so there is a couple of sappy moments involving family problems. Critters 3 also introduces Hollywood boy Leonardo DiCaprio in his first film. Good start kid to bad your only other good film would be Basketball Diaries. Despite DiCaprio's shitty filmography the guy is a good actor. Especially as a young kid. He was pretty good as the retard in that fuckin Gilbert Grape flick too. Anyway Critters 3 plays on a more serious level then the second film does or at least as serious as a monster flick about fur-balls from out of space  can be. 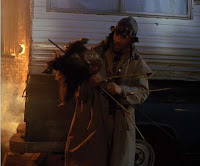 This time around the Critters attack a rat infested building full of poor folk. It kills off the films best character in the earlier moments and then terrorizes old folk, fat ladies and young kids. Charlie the bounty hunter shows up to kill some Critters and make an ass out of himself yet again. Charlie blows the shit out of the alien-fur-balls and even impales one with a metal antenna.

Being that Critters 3 is a 90's flick and the 90's generally sucked in every way possible, it is no surprise that the gore is held back that we gained in the second film. It doesn't dare to offer any naked flesh either but somehow it still manages to be fun in that children's monster flick kind of way. 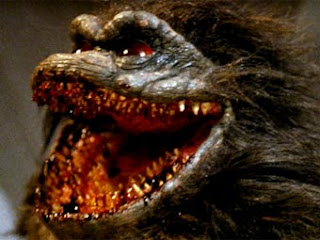 Email ThisBlogThis!Share to TwitterShare to FacebookShare to Pinterest
Labels: Critters 3, Critters 3 : You Are What They Eat, Monster Movies