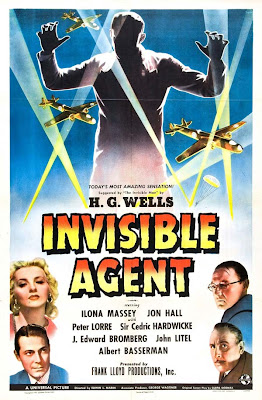 Almost ten years after the success of The Invisible Man, Universal Studios is still cranking them out. This H.G. Wells adaption shows that the Invisible Man can be of some service rather then a power mad psychopath. This time around he is an actual hero and he leaves for Nazi Germany as a secret agent and helps America win the war.

While Universals The Invisible Woman was an all out comedy and of course the first film was horror movie The Invisible Agent is a action/war film.

Our hero slaps the shit out of Nazi's, sets fire to their buildings, steals their women and drops bombs over their heads. We get a bunch of explosions and it makes for some high class entertainment.

The lead actress isn't all that attractive but is sexploited for some sex appeal. In one scene she undresses in front of a mirror while our invisible man watches. She of course falls in love with him after all he is an American and these Nazi's "Treat women like dogs". Instead of bandages our transparent man wears cream on his face so the blond babe gets to see what he looks like (sort of). 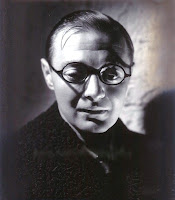 Perhaps one of the weirdest aspects of Invisible Agent is the character of Peter Lorre. This thing came out the same year Lorre did Casablanca but this time he is on the enemies side. Peter Lorre plays a Japanese soldier in Nazi Germany. Of course he doesn't look Asian at all but he does a pretty good job at being a creepy villain. In one of his best scenes he tries to cut a mans fingers off with a heavy machine used for slicing through news papers and he meets his fate in true Japanese style by dressing in white and committing Harakiri. He also does a bit of Kung Fu and chops Nazi's in the back of the neck with his hands.

Despite the fact that Peter Lorre has a strange voice to begin with it doesn't help when he is trying to sound like he is Asian. I personally feel that Boris Karloff did a better job in the Mr. Wong detective series.

I really love all of these Universal Studios invisible movies. While obviously preferring the original James Whale film I found Invisible Agent to be just as good as the true sequel The Invisible Man Returns. If you like these films the way that I do, be sure to check this one out for a good time full of Nazi-Ass-Kickin! 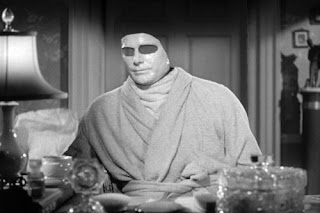