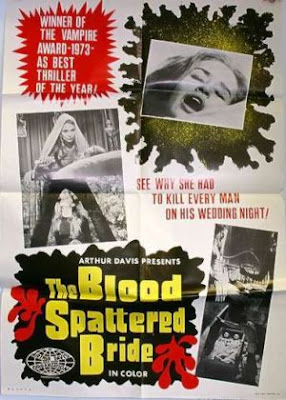 This Spanish vampire flick is completely under rated in my opinion. Personally not being a big fan of vampire movies this one is way up on the top of the list of vampiric tales for me. This along with Daughters Of Darkness which is very (almost to much) similar in plot and feel are amongst my favorite lesbian vampire films.

The Blood Spattered Bride was double billed with I Dismember Mama as A Frenzy Of Blood and left behind one of the weirdest trailers in cinematic history. Its a must see for any true horror-trailer-fanatic. While I Dismember Mama may be a guilty pleasure for some and a novelty for others The Blood Spattered Bride is actually a great film and the two couldn't be more different from each other.

Of course Quentin Tarantino would pay homage to this Spanish gem in Kill Bill for the scene where Uma Thurman catches a bullet in the head on her wedding day. Like I Dismember Mama, Kill Bill doesn't come close to the Blood Spattered Bride either but none the less its nice to see that someone out there pays some recognition to this flick aside from truly demented Euro Trash aficionados like yours truly.

The story tells of a newly wed couple who spend their honeymoon in a castle with a morbid history. The young bride loses her virginity to her older husband and starts to change emotionally. Her sexual fantasies/nightmares haunt her along with a vampire named Mircalla.

The bride is of course bitten and indulges in lesbian acts of pleasure while she is being conditioned to kill her husband. "He pierced your flesh to degrade you! He spat inside you to enslave you!" Its not long before we have some murder on display but the best scenes in the movie come in the form of nightmares and at times it is difficult to tell what is real and what is dream. We have a grizzly stabbing that leaves our bride spattered in blood (hence the title), A heart is ripped from a mans chest, another man has his throat slashed and then is shot in the face with a riffle, a 12 year old girl is shot in the head at close range in true Lucio (The Beyond) Fulci fashion and perhaps the most memorable and by far the strangest scene in the movie shows a man discovering a tube protruding from the sand on the beach. When he tries to dig around it he learns that it is the breathing tube from scuba gear. He digs more and finds the scuba gear is being worn by a beautiful naked blond. Naturally he takes her home for his wife to see. Who thinks this up? What an amazing scene in the bizarre. Nothing like this ever comes from the minds of American film makers. These odd moments really just add to the charm of The Blood Spattered Bride. We also have a few rape scenes, a decent amount of nudity and of course blood drinking. We also have Spanish actress Montserrat Julió who appears in a bunch of crazy stuff like Horror Rises From The Tomb, It Happened At Nightmare Inn, Doctor Jekyll And The Werewolf.

Fans of this movie might also want to check out Daughters Of Darkness and Vampyros Lesbos. 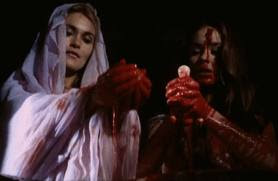 Email ThisBlogThis!Share to TwitterShare to FacebookShare to Pinterest
Labels: Blood Spattered Bride, Till Death Do Us Part, Vampires