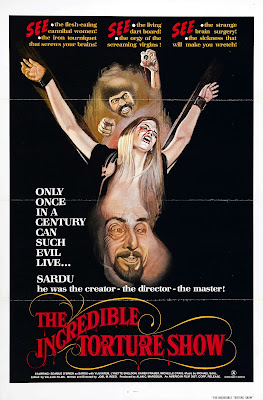 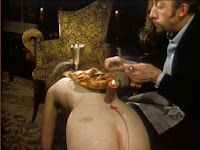 Some call it trash (which it is) and others call it art (which it is) but I just call it high entertainment in cinema of the bizarre. If you took Herschell Gordon Lewis Wizard Of Gore and threw in tons of nudity and strong elements of S&M you would come up with something like Blood Sucking Freaks.

Sardu runs an "Off-off Broadway" theater in the slums of New York City called The Theater Of The Macabre. A typical evening at the theater offers up real life murder on stage. Women have their hands sawed off, eyeballs plucked out, heads squished in old-time torture devices and the audience has the privilege of believing it is all an act. Little do they know it is very real and what goes on behind the curtain is even more depraved then the horrible tortures that the show offers. 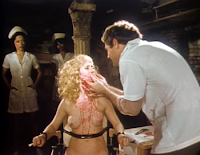 The theater is a front for Sardu's white slavery ring. The women who fall victim as the stars of Sardu's shows are just the ones that Sardu has no longer a purpose for. The rest are just pawns in Sardu's S&M fantasy. He tortures them into making all of his fantasies become real.

Sardu's partner in crime is an African American midget with a big Afro whom goes by the name of Ralphus. Ralphus is even more demented then his master Sardu. Ralphus enjoys cooking human eyeballs for lunch, recieving oral sex from freshly severed heads and chopping the feet off of young dancers but together Sardu and Ralphus make for a pretty evil team. They use naked women as human dart boards, chop off fingers, arms and legs for amuesment and use women as furniture.

In one of the most memorable scenes a woman has all of her teeth pulled out and then has a power drill driven into her skull. Then a straw in inserted into her head and her brains are sucked out. Pretty classy stuff!
We also have a group of naked female cannibals, castration, multiple decapitations, homosexual and heterosexual necrophilia, a sledge hammer to the back of the skull, women are stretched on the rack etc. etc.
We also get plenty of sick and twisted memorable quotes "Put her to work in the bathroom. Her mouth will make an excellent urinal".

Fans of movies like Hostel and Saw probably won't like this movie due to the filth and rawness that flows through it but if you have any self respect you owe it to yourself to see where guys like Eli Roth got their inspiration from. 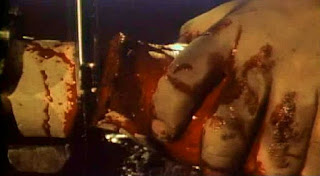