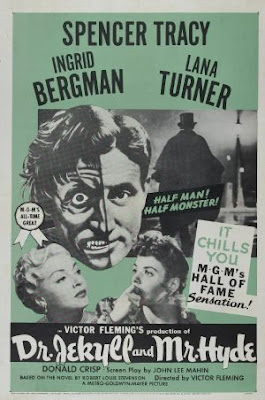 The director would become known for The Wizard Of Oz and Gone With The Wind but I respect him for his remake of the 1931 film about a mad scientist who creates a drug that separates the good and evil within him, giving them two separate identities known as Jekyll and Hyde.

Ingrid Bergman would go on to do Casablanca in the following year but she does what she does best in this one as well. Her tears spill from a broken heart in this movie as well but she cries even harder from the brutal beatings that she gets from Mr. Hyde.

In one of the films most memorable moments Mr. Hyde fantasizes about being pulled on a carriage but instead of horses doing the pulling a naked Bergman pulls him around as he whips her from atop the carriage. Its not long before Hyde's fantasy becomes a reality and Bergman's character is covered in bruises and scars from Hyde's cane which he uses as a weapon of choice.

Aside from beating the beautiful Bergman Hyde's idea of good pass time include hanging out at burlesque bars, getting into bar fights, spitting grape seeds in peoples faces, jumping through windows, kicking people down stairs and having in out with the police.

We get a sort of Wolf Man transformation scene each time our doctor takes his liquid drug and the makeup is pretty awesome. I have always related The Wolf Man to Dr. Jekyll And Mr. Hyde for this reason and the fact that the two films share an emotional and scary tone at the same time. Then there is also the fact that the two characters lose control over their body, mind and soul.

Fans of Lon Channey Jr's. classic is bound to love this movie as well. 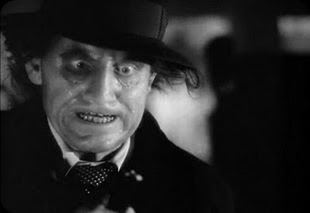