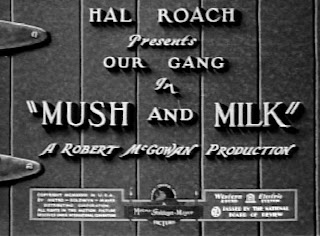 This time the gang are Orphans at Bleak Hill and the name suits the place fine. It is ran by a old hag who's face is pretty grotesque and would have worked perfectly in a horror movie. The kids are yelled at constantly, forced to do chores and even threatened to be whipped. 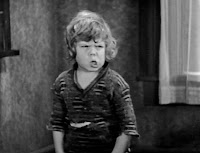 So naturally the Rascals aren't the happiest we have seen them. They spend most of the time complaining and discussing what it will be like when they get out of Bleak Hill. They speak briefly of their parents and yet again Stymie's pappy is in prison.
On the brighter side of things Our Gang does have a friend in the building. A old man looks after them and gives them their education. He also tells them that some day when his money comes in he will get the whole gang out of Bleak Hills and they will live like royalty. Until then the Rascals go on with their harsh days of cleaning, cooking and freezing at night.

Stymie really steals the show in this one and he has some pretty funny bits. The most memorable is a scene where he is attempting to milk a cow. He comes up with the idea to attach a vacuum cleaner hose to the cows utter and suck the milk out. The plan goes well until he accidentally spills the bucket of milk. How will the gang get their Mush And Milk without any milk? No worries Stymie puts together a concoction of plaster and water. Once the gang sits down to eat, the mush solidifies, leaving Stymie dumbfounded.
Of course Spanky has his time in front of the camera. He answers phones, cracks jokes during class and even gives a speech but I really feel that this short goes to Stymie. This rather bleak instalment in the Our Gang series does have a happy ending (sort of). The kids teacher does get his money and he does take the kids away from the awful Bleak Hills. The kids go to the amusement park and then to a fine restaurant. The only problem is, they are served Mush And Milk. 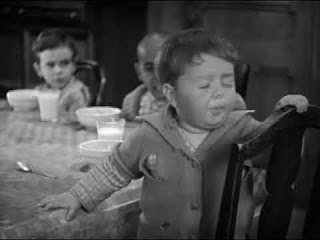