Entrails Of A Beautiful Woman also know as Guts Of A Beauty is the ultra perverse follow up to Entrails Of A Virgin or Guts Of A Virgin. The sequel surpasses the first film on every level and gets so high up on the sleaze-o-meter that a shower is strongly recommended after each viewing. This truly is a sick flick in every sense of the word sick. What we get is a 68 minute sit through of extremely graphic sex, rape and over the top gore & violence.

Guts Of A Beauty becomes one of the most warped rape/revenge films I have ever seen. Aside from some genitals and pubic hair the camera holds nothing back in the nasty rape scenes. We get blood running down the rape victims legs and some nasty stains on the mattress.
The story is basically about a girl who is drugged and raped by a Yakuza gang. The girl manages to escape to a hospital where she commits suicide in front of a female doctor. The doctor decides to avenge the dead girl by killing off the Yakuza but things don't go the way the doctor planned and she finds her self in the very same situation, being drugged, raped and murdered. Some how the dead doctor comes back as a disgusting bloody mess of a monster with a mutant penis with some sharp teeth and a giant gaping vagina.

The monster looks like a cross between Pumpkinhead and skinless Frank from Hellraiser. The monster kills off Yakuza gang members one by one in various perverse and gory ways. One girl is raped with the sharp toothed penis and the mutant pecker pops through her chest like a monster out of Alien. Another guy has his face shoved up the hermaphroditic monsters vagina and he suffocates. When his head is removed from the monstrous-vag he is covered in a thick steaming slime. One guy is shot and then has a rod shoved into the bullet wound. Next he is chained to a wall and chopped to pieces. The most impressive gore scene is probably when a guy gets half decapitated. Its a god damn bloody mess.
Guts Of A Beauty isn't for everyone but for all us sickies out there who like nasty rape revenge flicks and silly monster movies this one is the answer.
Quote of the movie "Make your pussy a question mark.". Ill just let you dwell on that until you watch the movie. 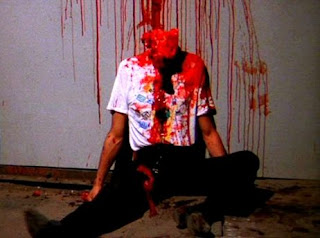