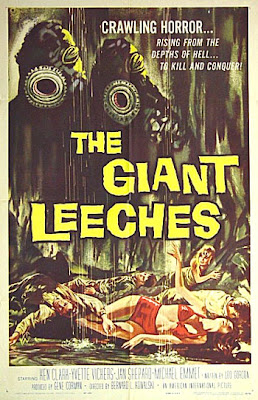 If you love crappy 50's monster flicks as much as I do, Attack Of The Giant Leeches is a must see. In the films opening we get a moonshine slugging hillbilly emptying shotgun slugs into a giant leech. Its hard to tell what the monster is supposed to be at first but anyone with half a brain could look down at the dvd/vhs and say "ohhhh its a leech".
Attack Of The Giant Leeches then chooses to do the typical 50's monster movie thing and not show the monsters for a bit because the rest of the town doesn't believe the crazy drunk hillbilly but we the audience wait eagerly because we were teased in the first few seconds with our sighting of the silly looking monster.

The hero of this campy B-Movie is as lame as can be but we get this awesome couple that help keep this schlock fest moving along swiftly. The couple consists of a fat tub of lard husband and his abusive harlot wife. His wife walks around with no pants on and taunts men with her legs. When ever her husband tries to talk to her she makes fat jokes and tells him to shut up. Fat man eventually finds out that his wife is cheating on him and he chases her and her cry baby lover into swamp land with his trusty shotgun. The harlot wife is pulled down into a underwater cave along with her lover where they are held captive and have the blood sucked from their bodies. Its not long before the blood suckers have their own collection of humans to suck dry in their cave and its pretty entertaining to watch these cheesy monsters suck on the victims faces.
Once the town learns what is happening they form a torch burning mob and head for the swamps as if Frankenstein's monster is hiding in there. Then they decide to do some dynamite fishing and they go to war with the army of giant Leeches.
This ones good old fashioned mindless fun and lovers of cheesy, campy, 50's monster pictures will have a blast. The best part is that Attack Of The Giant Leeches is always on those cheep-o public domain box sets. Odds are if you own a few multi packs, you probably have Attack Of The Giant Leeches. So drop a buck at the nearest super market and pick it up. 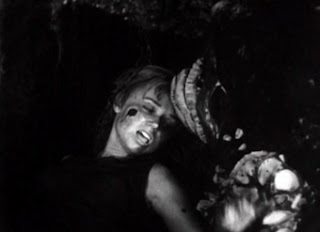 Email ThisBlogThis!Share to TwitterShare to FacebookShare to Pinterest
Labels: Attack Of The Giant Leeches, Monster Movies