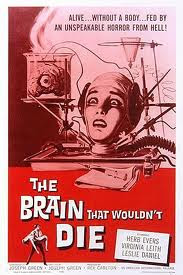 The Brain That Wouldn't Die is one of the all time great trash films. It has everything from brain surgery to decapitated heads that talk. This classless trash flick is about a mad scientist named Bill who has a new serum that he is using for his human transplant experiments. Bill finds a new and more personal use for his serum when his soon to be wife is decapitated in a car crash. The crash scene on its own is hilarious. Bill is thrown from the drivers seat and lands near by in the woods. He runs back to the car that is now in flames and the camera takes an angle through a shattered window with flames blazing. We then see Bill's fiance's arm extend out towards the broken window for help. Bill takes his jacket off and sticks it inside the burning car and wraps his girls head in it and runs off. I can't help but wonder if he pulled his girlfriends head off or if she was supposed to have already been decapitated. After all only seconds earlier we see her reaching out for help. I suppose that is part of the beauty to these crazy exploitation flicks. 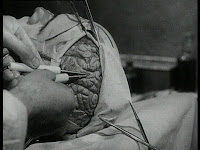 I have heard people call this movie boring and that statement really blows my mind because as I said the car crash, decapitation scene happens early on in the movie and from there it just gets crazier. Even before the crash we have a nice open brain surgery scene. This is all pretty nasty stuff for a early 60's flick.
Anyway once Bill gets his girls head to his laboratory he puts it in a sort of bin filled with his serum and some blood and the head begins to speak. Lets just say the bodiless head isn't exactly pleased that her brain isn't dead with the rest of her. Bill however doesn't share the same emotions and is determined to find a new body for the woman he loved. He heads for the local burlesque show where he will abduct females, kill them and take their body parts and only the best parts will suffice. 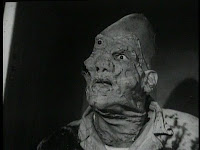 As if this wasn't all crazy enough we have a monster in a closet in Dr. Bill's lab. The monster is the failing result of Bill's earlier serum. The monster in the closet becomes telepathically connected with the talking head on the table and the monstrous duo take revenge on Bill and his deformed assistant. We actually get a surprisingly gory dismemberment scene where the monster rips the arm off of the Bill's assistant. The armless man runs up the stairs, smearing blood all over the walls. Later the monster will bite into a mans neck ripping a big chunk of flesh out, causing the man to bleed to death.
The Brain That Wouldn't Die also offers up a lingerie cat fight. A woman with a decaying face, A man with a "withered" deformed arm and a open heart surgery.
The acting is pretty bad and there is quite a bit of continuity going on in here. What else would you expect from such a classy movie.? The truth is I wish they were still making movies like this today. Who cares about acting when you have monsters, dismemberment and talking heads? 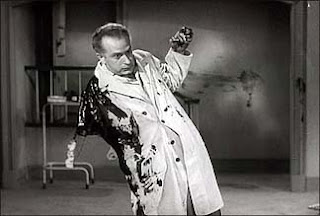